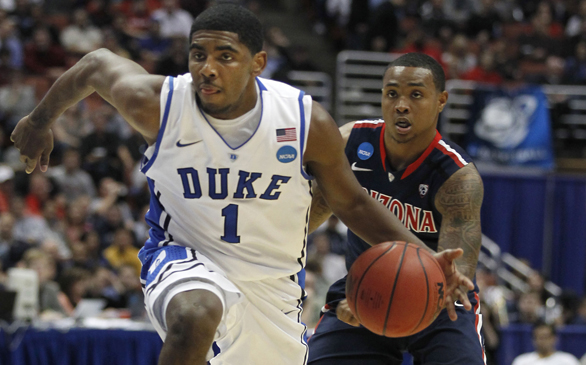 In terms of talent and depth, the 2011 NBA Draft will be one of the weakest the league has ever seen.

Despite the top two expected and talented prospects, NBA teams are uncertain if they will hit the lottery or not with their upcoming first-round selections. Two things are certain, however, and that is the top pick and No. 2 selection will be headed by a true point guard and a small forward that could play power forward.

Point guard Kyrie Irving, who comes out after his freshman year from the Duke Blue Devils, is the consensus No. 1 pick this summer. No disrespect to forward Derrick Williams from the Arizona Wildcat program, but Irving is hot and possesses a lot of potential to be one of the greats at his position.

At six-feet, two-inches tall and weighing 180 pounds, Irving is a beast due to his physique as a point guard. He can dish out the ball, drive and penetrate to create or score a hoop and his potential in becoming a leader can be very beneficial to the team who drafts him, even if he does not go No. 1 overall.

If the Cleveland Cavaliers do not select Irving as the top pick in the draft, it would not come as a shock, however. This is for many reasons, primarily because Irving is somewhat inexperienced even at the collegiate level since he missed significant time with the Blue Devils due to injury.

The Cavaliers could easily select Williams as the No. 1 pick, but this would not make any sense because they already have a true power forward on the roster, Antawn Jamison. Multiple media outlets have reported that the Cavaliers are actually working out Turkish center Enes Kanter, who was supposed to play for the prestigious Kentucky program and receive tutelage from head coach John Calipari.

Kanter, who is 19 years old, did not see action at the collegiate level with Kentucky because he was ruled ineligible by the NCAA. His manager tells Yahoo! Sports that the Cavaliers are considering him as the top choice of the draft.

“It wouldn’t be necessary for Enes to go again if he isn’t being considered for the top pick,” Max Ergul says. “Their word to me is good enough for him to return. They said they didn’t make a promise to anyone for No. 1.”

In reality, Cleveland needs a lot of help in rebuilding a once promising franchise when small forward LeBron James was still there. Since James took his talents to the Miami Heat, the Cavaliers became a below par squad. This is why there is so much uncertainty within that franchise in choosing the top pick; however, they also have the No. 4 overall pick as well, which would help them solidify themselves as an up-and-coming, competitive team.

The Minnesota Timberwolves have the No. 2 selection, which will most likely be used with Williams even if Irving is selected first. Minnesota has a true center in Kevin Love, and their desired point guard will be on their roster soon enough to shake up the league. Spanish prospect Ricky Rubio is dangerous, and so much so that he could be a franchise-impact player, one that only does good and positive things.

Nevertheless, rumor trades never cease to exist. Multiple media outlets have reported that Minnesota is seeking to trade their No. 2 pick. In fact, they have contacted the Los Angeles Lakers with hopes of attaining Spanish forward Pau Gasol, which makes a lot of sense. Will the Lakers bite, though? We will see on draft night.

Here is a look at the probable NBA first-round selections: