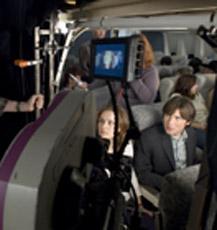 Red Eye represents a welcomed change of pace for Wes Craven. After the end of the Scream franchise and the release of this year’s troubled Cursed, Craven explores the suspense thriller, with suspenseful but mixed results.

Much of the film takes place on a plane, and it’s these scenes that are the most intense. Rachel McAdams plays Lisa, a hotel manager who finds herself seated next to a seemingly nice man named Jackson (Cillian Murphy). Eventually, he reveals that he is being paid to set up the murder of the director of homeland security, and needs Lisa’s help, or else her father will be murdered. As a result of the good anti-chemistry between the cool Murphy and the fretting McAdams, the claustrophobia-inducing scenes on the plane succeed, as long as one doesn’t think too much.

Unfortunately, too many questions pop into mind about such issues as why no one on the plane sees or hears Jackson head-butt Lisa. One also wonders why no one hears them have a huge physical fight in the bathroom. Even in a suspense film when audiences check all sense of reality at the door, these concerns are too glaring to dismiss.

Once they get off the plane, unfortunately, the movie falls apart. The third act consists of a lot of lifeless running around and a tired climax.

Thankfully, though, this is not the typical airplane drama with a hijacking or anything of that sort, and it is interesting to see Craven working in a different genre. He really makes it feel like the plane is a tiny space, in his use of mostly close-ups. The casting of McAdams and Murphy is also a great move, as these exciting new stars showcase their talents, and will continue to do so for many years to come.