Lane Kiffin: The Last Chapter of the USC Sanction Saga 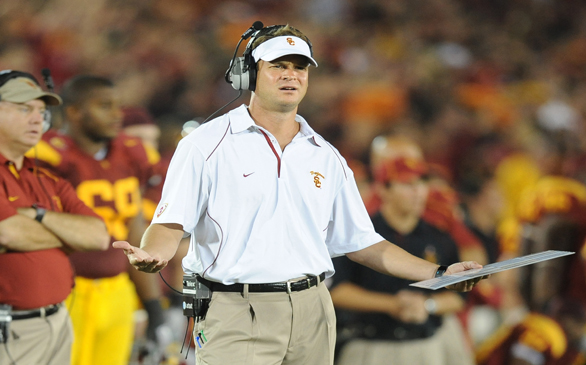 Just when the dark cloud over USC Athletics begins to clear, the last of the storm is piercing through. Players have been scrutinized and punished for past mistakes, and now the microscope is on USC football’s head coach Lane Kiffin.

Kiffin faces allegations that come from when he was a coach at Tennessee. The NCAA is conducting a 12-month investigation on Tennessee’s athletic program, which lead to basketball coach Bruce Pearl being fired and the resignation of athletic director Mike Hamilton. Looking to put the past behind him and move forward with the Trojans, Kiffin has been compliant with all of the NCAA’s requests dealing with this issue.

According to the NCAA, it alleges that in 2010 from Jan. 3 to 9, the Tennessee football staff made 16 calls to recruits, after being informed a month in advance that it was not allowed. Kiffin is being accused of allowing a recruiting intern to make illegal off-campus contact with high school staff members. This came after Kiffin was told that the intern was not granted permission to enter a high school’s property while accompanying a coach on a recruiting trip.

So how does this affect USC? Well, if Kiffin is found guilty of these allegations or more he could be greatly penalized. Some punishments could include him being suspended from games and a limitation on his recruiting for USC.

Kiffin already rounded up an impressive class in this past year alone, getting players such as Nickell Robey, Robert Woods and Markeith Ambles – talent that is crucial to USC’s success. Since the Trojans are not going to see the post-season, it's incredibly important that Kiffin continues to bring in new, fresh talent thus creating greater competition for starting positions.

Regardless of athletic turmoil, USC has always found a way to stand tall amongst its competitors. The good news that comes from all this is that a decision will not be made overnight. The NCAA investigations have not concluded, and it is still looking into Pearl’s violations.

Also Todd McNair, a former USC running backs coach, is suing the NCAA for libel, slander and negligence amongst other things. He filed the suit in the Los Angeles Superior Court and is demanding a jury trial. He feels the collegiate athletics governing body is responsible for him losing his job.

Besides that, the NCAA Committee on Infractions (COI) will have the burden of concluding this manner without any bias toward Kiffin. As USC awaits for this to end so does Tennessee, but of course both schools want different outcomes. As some Tennessee fans are still bitter about the fact that Kiffin abruptly left to take a job with the Trojans.

Sanctions will be imposed on Tennessee nevertheless, but as for Kiffin, his punishment – if any – will come later. If any action is taken, Kiffin will have the opportunity to appeal the decision. If filed, the appeal process will delay any action for another six to eight months, where during that time Kiffin can run his athletic program normally. Although this process is frustrating, this will be the last thing on people’s minds as the bowl ban will be over by the end of this season.

Also if his appeal is denied, like McNair he can file a lawsuit against the NCAA and ask for an injunction, which will delay sanctions even longer. This will take USC into the Class of 2014 recruiting, and the last year of NCAA scholarship sanctions, which were handed down less than a month ago.

If all else fails and Kiffin loses his lawsuit, USC can then decide whether or not to renew his contract, renegotiate or search for a new head coach. Regardless, by this time the bowl ban will be over and the scholarship sanctions will have ended too.

Unfortunately for Trojan fans, they have to wait until 2014 to finally put all these pesky sanctions behind them for good. As for now, it’s all a bunch of what ifs? All Trojan fans can do is hope for the best but prepare for the worst.

The silver lining within all of this, is that it will be over soon, and with the mentality USC Trojans have this is just more motivation to take a hold of the reins of the Pac-12 Conference once given the chance.