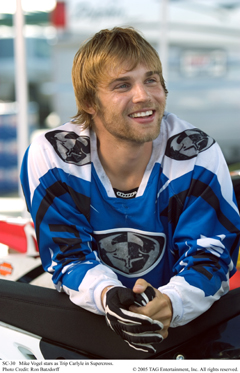 Look, there’s a reason the movie is called Supercross, not Superscript.

The brief 80 minutes of Supercross is more than half filled with scenes of motocross racers scurrying around tracks, which doesn’t leave much time for what moviegoers like to call a "story." Supercross crams its tale of two dirt-poor brothers trying to make their way in the motocross world into brief chunks, leaving us with the impression that even the biggest events – falling in love, achieving a career pinnacle, catastrophic injury – only take about two minutes apiece.

So, story-wise, Supercross is completely random and goofy (my favorite bit involves two racers, a guy and a girl, in a "love scene" where the money shot is both of them doing wheelies). But the racing is well-shot and the movie is pretty much what you’d expect: When it comes down to a big race between a heavily-funded jerk and a humble nice guy, who do you think is going to win and who do you think will end up kissing dirt?

Supercross is currently in theaters.