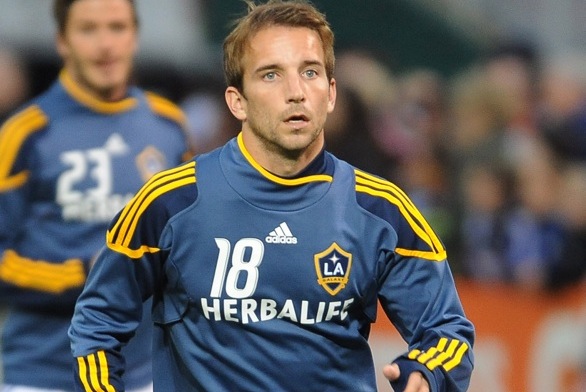 Forward Mike Magee stepped into the goalkeeper role for the Galaxy.
(Credit: Chuck Myers/MCT)
The starting goalkeeper suffered an injury. Their backup was ejected. But the one after that kept the game scoreless.

Yes, it was that kind of day for the Los Angeles Galaxy, who collected a scoreless draw on the road against the San Jose Earthquakes Saturday afternoon before a sold-out crowd of 10,872 at Buck Shaw Stadium in Santa Clara, Calif.

With the tie, the Galaxy moved their overall record to 9-2-8 with 35 points on the season. Both are a Major League Soccer best, as they are also in first place of the Western Conference.

In the 24th minute of play, Jamaican goalkeeper Donovan Ricketts came off the field of play with a left forearm injury after a collision with San Jose’s Khari Stephenson.

“We don’t know,” Galaxy head coach Bruce Arena says of Ricketts’ injury during the post-game press conference. “He needs to get an x-ray, but it doesn’t look good.”

Josh Saunders replaced Ricketts, but Saunders saw a red card in the 43rd minute. This left the Galaxy without a goalkeeper, forcing Los Angeles to equip midfielder Mike Magee into the goal. With four saves under his belt, Magee helped L.A. to a shutout.

“I looked around after Josh Saunders got the red card, and I nominated myself. I did all right I guess,” Magee states of his unexpected goalkeeping performance. “Looking back I have no idea why I nominated myself. I had no idea that after halftime I would be back out on the field. Then it hit me that I was going back in goal, and that was pretty nerve-wracking.”

Los Angeles returns home on the Fourth of July, as they host the Seattle Sounders at the Home Depot Center in Carson for a 7:30 p.m. start. Fireworks are expected once the match ends.