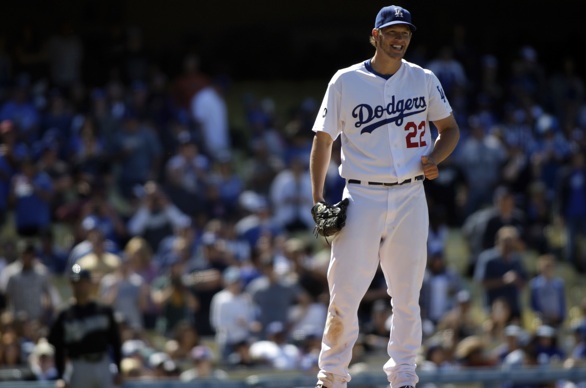 Clayton Kershaw of the Dodgers
(Credit: Michael Robinson Chavez/Los Angeles Times/MCT)
Starting pitcher Clayton Kershaw is truly developing into the much-needed ace the Los Angeles Dodgers have desired for quite a long time. At 23 years of age, Kershaw is hitting the record books early.

Just this Sunday, he threw his third complete game of the year in the Dodgers 3-2 win over the visiting Los Angeles Angels of Anaheim. Kershaw collected his second straight complete game after posting a line of nine innings, six hits, two runs, no walks and 11 strikeouts.

“I got a lot of leadoff guys on base, which makes it easy to score runs,” he says. “I’ve got to work on that”

The Ks statistic is a season-high for Kershaw, who has reached that number thrice now and twice in a consecutive manner. Also, it is the fourth time he surpasses the double-digit mark in batters fanned.

“We needed a win,” he confesses. “It’s awesome any time you walk off. Tony came up huge.”

He is referring to outfielder Tony Gwynn Jr., who hit a walk-off RBI single to seal the comeback win for the Dodgers (35-44) to end their three-game losing streak.

Earlier in the week, Kershaw blanked the visiting Detroit Tigers when throwing a scoreless nine innings while allowing two hits, walking one and fanning 11.

“I felt good tonight. I was mixing speeds and getting some quick outs,” Kershaw says after his outing against Detroit. “I kept my pitch count down and stayed through nine. Strikeouts just happen. Some days you’re going to get them and some days you’re not.”