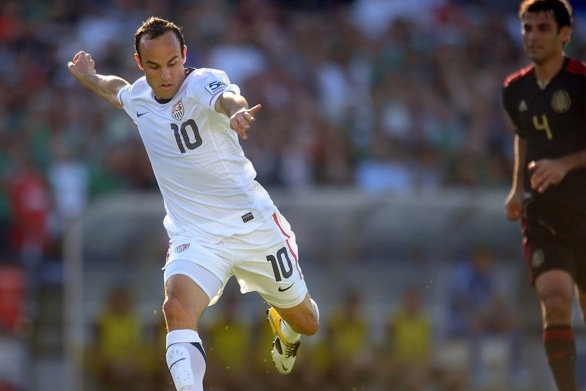 Team USA's Landon Donovan scores a goal in front of Mexico's Rafael Marquez.
(Credit: Wally Skalij/Los Angeles Times/MCT)
The U.S. men’s soccer team held a 2-0 lead in the first half of the Gold Cup Final at the Rose Bowl in Pasadena before 93,420 fans, but the Mexico side fired four unanswered goals to capture the crown, 4-2.

“They’re as dynamic as any Mexican team that I’ve ever played against,” U.S. striker Landon Donovan says of Mexico’s national soccer team. “They’ve got a few guys who can change the game in a heartbeat.”

After the game, U.S. head coach Bob Bradley acknowledged Mexico’s dynamic play as well. With this defeat, Bradley is rumored to be on the seat, according to multiple media outlets. U.S. Soccer Federation president Sunil Gulati declined media interviews after the match, and the players showed mixed feelings about Bradley’s future.

“A game like today has nothing to do with Bob,” starting goalkeeper Tim Howard remarks. “It is about us. We stepped over the line. The game plan was right, and we didn’t get it done.”

Perhaps the most surprising response came from Donovan, who is the L.A. Galaxy team captain and arguably the best player of the United States.

“That is not my concern,” he says. Evidently, Donovan refuses to back up Bradley’s future with the organization.

Midfielder Michael Bradley, the son of Bob, gave the U.S. team a 1-0 edge in the eight-minute mark. Off a corner from the left flank, striker Freddy Adu delivered a well-placed ball into the box where it connected with Bradley’s head. Bradley re-directed the leather into the back of the goal net, where Mexican goalkeeper Alfredo Talavera suffered the surprise. Adu, a newcomer to the national team after an ailing early teen years career, received the received the assist.

“We’re disappointed,” Coach Bradley says after the match during the press conference where a colossal amount of media outlets attended. “A game like this, when you’re together for a month, you feel like you’ve grown and put yourself in the final and let it get away.”

The U.S. netted another goal at the 23-minute mark, when Donovan scored his 13th Gold Cup tournament goal; this is a new Gold Cup record. After a pass from Adu, midfielder Clint Dempsey released the ball for a running Donovan. After a pair of jukes, Donovan fired a low left-footed shot into the back of the net.

Obviously, this was not enough for the Americans who saw Mexico score four unanswered goals throughout the rest of the affair.

“We have to learn to keep composure,” Bob Bradley says of losing the 2-0 advantage. “These are learning experiences when you’re playing against a skillful good team. You have to find a way to deal with it, and tonight we didn't do a good job.”

Six minutes later, the Mexico side responded with their first score via midfielder Pablo Barrera. Striker Javier Hernandez, who currently plays for English Premier League powerhouse Manchester United, received the assist after passing the ball to Barrera, who fired a right-footed shot past Howard.

“We’re in a good place,” Howard says to numerous journalists outside the locker rooms and next to the team bus. “This will hopefully motivate us. We’re not running away just because of this game. Right now it all hurts … That’s what happened tonight.”

The score became even at two all when left-flank midfielder Andrés Guardado scored from inside the box off a rebounded ball during the 36th minute. As soon as this occurred, the U.S. seemed to go through a mental lapse, one that they could not recover from.

“It’s an empty feeling,” Bob Bradley states of the surprising loss after being up 2-0 early in the game.

Five minutes into the second half, Barrera scored on a beauty. Off a Guardado connection, Barrera drilled a right-footed shot from three-laces out that somehow got through Howard. The shot curled inside out to the left side of the goal, which does not occur often on such scores.

In the 76th minute, Giovani Dos Santos sealed the victory for Mexico, who won their second straight Gold Cup tournament for a record sixth time. Dos Santos managed to avoid and escape multiple U.S. defenders, including a series of shuffles against Howard. Dos Santos then did the unexpected; he chipped the ball over the defense and into the back of the net at the left side, where defender Clarence Goodson could not head the ball away.

“Tonight I thought Gio was excellent,” Donovan confesses. “I can say Barrera was excellent. Actually of all things, we did a good job with Chicharito, preventing his chances. They just had too much for us.”