The Killers: What’s All the Hot Fuss About? 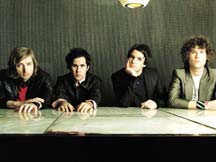 Emerging from the dunes of Las Vegas, a city where the last rock group to garner national attention was ’80s hair-metal band Slaughter, The Killers revive the party spirit of this decade of decadence while breathing life into the synth-pop genre on their sizzling debut, Hot Fuss. Each song is imbued with the vibe of hazy party nights that only a band from Sin City could capture. Vocalist Brandon Flowers is quick to point out that there is more to the group than the neon glow of their home base.

"People just have a fascination with Las Vegas," Flowers says. "It’s really like two cities here. There’s a really normal side and then there’s the Strip. Most people just see the Strip when they hear Las Vegas, and we really are from the normal side of the stage."

The Killers’ path began in a way akin to many other bands: guitar player places ad, lead singer answers, fast forward through search for bass players and drummers to finally hit pause and arrive at their current lineup. This consists of Flowers on vocals and keyboards, Mark Stoermer on bass, David Keuning on guitar and Ronnie Vannucci on drums. According to Flowers, formulating The Killers into one cohesive unit was simple.

"We like U2," Flowers says, explaining part of the creative vision that binds them together. "We all have our own bands that we like, but U2 is the main one for us as a whole." He quickly adds, "We want to be the next U2!"

Armed with a moniker lifted from New Order’s "Crystal" video, the quartet worked hard to build a strong local following before trading in their day jobs to embark across the Atlantic. After concluding a stint of shows in Britain and being signed by Lizard King Records in the UK, Island Records snatched them up for their U.S. debut.

While self-producing their record in the U.S., the band endured fires, floods and an earthquake before heading back to Britain to mix the album with legendary producer Alan Moulder (U2, Smashing Pumpkins, Nine Inch Nails). The Killers plan on working with Moulder again, with hopes of him taking on the producer role for their sophomore album.

"It was definitely a treat to be in the studio with him (Moulder)," Flowers says. "We were actually talking to him about doing stuff with him on the next album, maybe more than mixing. We loved how he does things."

The Killer’s Hot Fuss is an album Flowers hopes American audiences are ready for. "Time will tell, I guess, but it’s definitely going to be kind of hard. I mean, people want pop punk over and over — it’s got to end eventually. But hopefully they’ll be wanting something new, and we’re definitely willing."

The Killers are attempting to be more than just catchy dance beats, evident in the creative and intelligent lyrics of their tracks known as the Murder Trilogy ("Leave the Bourbon on the Shelf," "Midnight Show," and "Jenny was a Friend of Mine"). The band also uniquely combines synth-pop with gospel background vocals on "All These Things That I’ve Done." Meanwhile, the first single from Hot Fuss, "Somebody Told Me," shows that they don’t take themselves too seriously, with tongue-in-cheek lyrics: "Well somebody told me / you had a boyfriend / who looks like a girlfriend / that I had in February of last year."

With the recent release of Hot Fuss, The Killers have their eyes focused on conquering their native shores and winning over fans in the States. They’ve recently completed their first national tour, along with performing at some of the year’s hottest music festivals, which include South by Southwest, the Coachella Music and Arts Festival and the KROQ Weenie Roast. The Killers have also opened several sold-out dates with Morrissey.

"I think this debut album is so solid. I’m not really worried about it at all," Flowers admits. "Nobody is writing classic, amazing songs anymore, but we’re going to do our best. If you put us up against most of the other bands, we are killers," says Flowers with a laugh.