Beats, Rhymes & Life: The Travels of A Tribe Called Quest 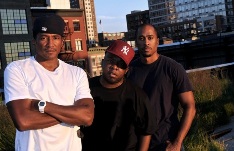 Nostalgia for the ’90s is big these days. With a bastardized version of “90210” festering on the CW and half-shirts being sold at Forever 21, the age of Cross Colors, pegged jeans and bang waves is seeping back into popular culture, not always in the most welcome ways. But get ready to bust an Arsenio Hall-style fist pump because the new documentary Beats, Rhymes & Life: The Travels of A Tribe Called Quest is a fantastic voyage back to the one of the golden eras of hip-hop.

Helmed by Michael Rapaport – best known for his acting work in films such as Higher Learning, Beautiful Girls and Deep Blue Sea who makes his debut as both director and documentarian – Beats, Rhymes & Life begins with shaky, almost too close, handheld footage from inside a shabby wood-paneled trailer in 2008 after what might be the final performance by a recently reunited Tribe. Having just walked off-stage, picking a plate of fruit salad, Q-Tip, one of the group’s four founding members and perhaps the best known, asks Rapaport if his bandmates agree that they had just played their last show together.

“What did Phife say?” he prods, still needing the approval of his life-long friend-turned-estranged collaborator Phife Dawg, before bristling and adding that the only other time the group might return to the stage together again is “if we get into the Rock ’n’ Roll Hall of Fame.”

Leaving behind their venomous and alienated reunion for the ’08 Rock the Bells Tour, Rapaport transports audiences to Queens in the early 1980s, when two young boys, Q-Tip (born Kamaal Ibn John Fareed) and Phife (Malik Taylor), inspired by rappers like Run DMC, started beatboxing and rapping. Soon, they linked up with like-minded musicians Jarobi White – who would leave the group just as they started to gain popularity in 1990 – and DJ Ali Shaheed Muhammad to form A Tribe Called Quest.

While some of the film’s highlights are moments of musical insight – for example, when Q-Tip plays bits of records he sampled to create some of Tribe’s best known beats – or interviews with fellow rap luminaries like the Beastie Boys and Pharrell Williams about Tribe’s incontestable legacy, the narrative largely focuses on the interpersonal strife that eventually destroyed the group and the love that still bonds them together.

As much a portrait of a musical group as it is a dysfunctional family, it’s also an enthralling time capsule and a love letter to a golden age of great music that might never be duplicated.

So to answer the age-old question: Can I kick it?

Visit the Beats, Rhymes & Life: The Travels of A Tribe Called Quest website at BeatsRhymesAndLifeMovie.com

Beats, Rhymes & Life: The Travels of A Tribe Called Quest releases in select theaters July 8.
Article posted on 6/27/2011
This article has been viewed 3736 times.