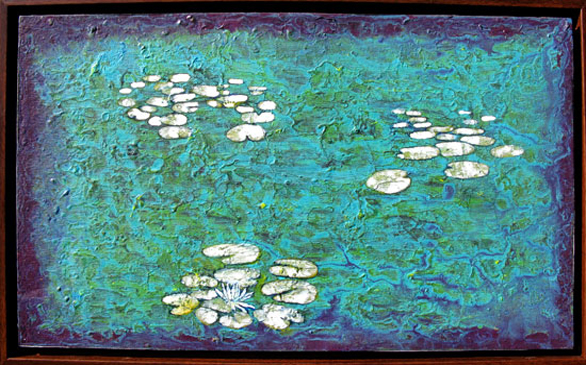 Pam Douglas’ The Way of the Lillies

Having only been to so many places in California during the two or so years since I moved to Los Angeles, a gallery reception in Pasadena soon had me jumping up and down. On June 24, the Pasadena Convention Center held the opening reception for Deverill Weekes’ photographs.

Sponsored by the famous cosmetics brand MAC, the exhibition presented Weekes’ selection of portraits of today’s greatest make-up artists. If you expect to see really artistic and beautiful make-up artsy photographs, then you will be in for quite a disappointment. However, by no means were the photographs low in quality – they were rather, just ordinary. They were a collection of headshots of make-up artists like San Winston (His photograph was by far the most interesting out of the bunch.). Not much to see, but hey, at least the photos came out beautiful.

Despite its quality, the exhibit was extremely small and was much too crowded. It was hard to see the photographs with ease since everyone was clustered around the number of prism stands to take a glimpse. Being the short girl that I am, I had to peer around people’s shoulders and make sure not to knock anything over with my butt.

At least the convention center was surrounded by good places to eat right?

Pam Douglas The Life of Water

This exhibit was probably far more interesting than the one I mentioned above. Held at the TAG Gallery at Bergamot Station, The Life of Water is a series of paintings that explores the vital energy within water. Up until July 16, Pam Douglas speaks of her understanding of water.

Douglas is a professor at the USC School of Cinematic Arts and a winner of the Humanities Prize and other nominations including the Emmys. She is a multi-credited dramatist, and The Life of Water turns out to be her third solo show at TAG Gallery. She has been represented by venues such as LACMA and many other juried exhibits such as TarFest.

Her artistic style is very dreamy and spiritual – simple but power. This exhibit in particular, concerns the subject of water. Her use of contrasting colors, black, white and shades of blue catches the viewer’s gaze. And for some reason, just staring at the paintings makes you doubt your ears. Not your eyes, but your ears. It seems as though all the chit chatter in the back slowly mutes itself and you can hear a distant splash of waves, or the dripping of water like rain when it is drizzling out. The series of paintings puts the viewer in serenity.

“My paintings express ‘realities’ which are possible only in spirit.” Like Douglas states, her paintings are real, because they capture the essence and the energy of the subject, and succeed in recreating it … through paint.

Bergamot Station in which TAG Gallery exists, is actually a very amazing venue. It is a large space for parking (finally, thank you), surrounded by numerous galleries, each hosting a different artist or two, or three. If desired, visitors can choose to drop by other galleries within the station as well.