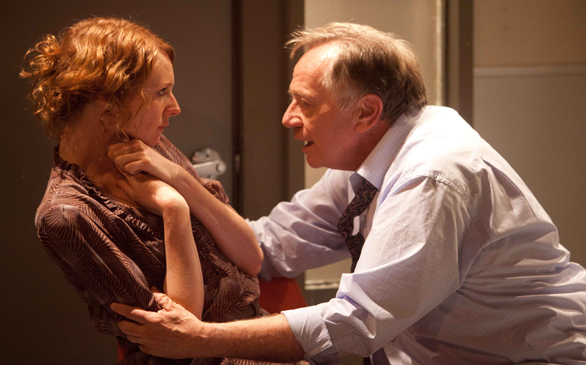 Having made its Los Angeles debut on June 10 at Rogue Machine Theatre, “Blackbird” follows the turn of events after Una (Corryn Cummins) unexpectedly shows up at Ray’s (Sam Anderson) work, demanding him to discuss the meaning of their relationship. The first 15 minutes are practically spent with the duo arguing why Una is there in the first place. It was obvious that the relationship ended very strained, and there’s unsettled resentment between the two. On top of which, it’s a complete mystery the type of relationship they had, due to the actors’ significant age difference.

Even though it takes a while to get to the core of the play, Una’s revelation is so shocking that it grips you to your seat. “Blackbird” approaches a taboo issue like no other. It’s a contradiction to say that “Blackbird” is about the paradox of human emotion, because plays are meant to take us out of our reality and step into another’s mindset. Yet, “Blackbird” is just that.

Years after Una and Ray’s illicit love affair when she was a minor, she returns as a courageous, yet cynical and childlike woman who releases all pent-up anger and confusion for Ray’s actions. “Blackbird” twists this subject on its ear, in the sense that Una isn’t angry with Ray for the usual reasons.

Anderson and Cummins give compelling performances as they reminiscence the past and tell each other their side of the story. Despite much restraint from Ray, they finally tell the absolute truth about what they felt for each other. The play wasn’t written to hold back or make Una the victim.

The balance between the two characters’ innermost feelings were key to make the audience see both realities. It was rather daring to go as far as to call it love, but that was part of the fascination of the play.