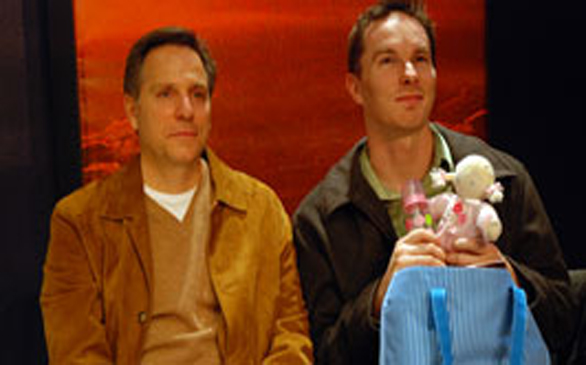 Darcy Martin perhaps does not have the most prominent role in “Departures,” but she sure made a grand impression during the play’s opening night at the NoHo Arts Center in North Hollywood. Filled with true wit and sporadic drama, “Departures” features 15 travelers with 15 destinations at the airport. Fifteen life stories shake and bake the theatrical touch in this often hilarious and flamboyant, yet emotionally enriching piece of fine art.

Directed by James J. Mellon, “Departures” carries a long list of writers who rewrote the piece to grant the public a newly revised version within the multi-award winning NoHo Arts Center Ensemble (NoHo Ace). And they deliver!

Several stories connect with each other, while multiple individuals momentarily settle in the waiting areas by boarding gates. This is where the beautiful, sexy, talented UCLA graduate Martin comes in. She plays Molly, the younger sister of Brooke (Karesa McElheny), and both are on their way to a family funeral.

Martin, who attended the Bruins’ department of Theater, Film and Television, served her role exponentially well. Her work was magnificent.

But there is more to “Departures” than Martin. For example, the story of a homosexual couple portrayed by Norman P. Dixon (Scott) and Jonathan Zenz (Randy) is moving and essential to the overall brilliance of the play.

The couple is on their way to China to adopt a baby, but their lawyer tells them not to leave after all, due to complications in the adoption process. After a careful and a profound discussion, Scott and Randy make the decision to continue their trip with hopes of bringing home their future baby.

Another outstandingly funny character is that of Annabeth Rickley, who plays a flight attendant who randomly appears at the center of the stage on the phone calling and leaving a message to a Spaniard. This character truly spices “Departures” for its creativity and hysterical voicemail messages.

Since this production successfully utilizes both vehicles of comedy and drama to tell the various anecdotes, “Departures” is brilliant.