The Warrior's Way, Season of the Witch and More 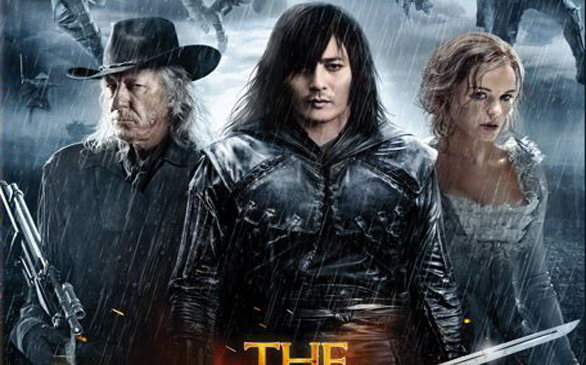 The Majors: An Asian assassin (Dong-Gun Jang ) travels to the American West to start a new life but can’t escape his past in The Warrior’s Way. Geoffrey Rush and Kate Bosworth co-star.

Paul Giamatti nabbed a Golden Globe for his portrayal of an irascible TV producer recounting the ups and downs of his three marriages in Barney’s Version. Dustin Hoffman and Minnie Driver co-star.

After leaving his wife and kids 40 years ago, a burnt out musician (Kris Kristofferson) returns home to try to make peace and bond with his grandson in Bloodworth. Val Kilmer, Hilary Duff and Dwight Yoakam co-star.

Nicolas Cage and Ron Perlman are a pair of Crusade knights escorting a woman accused of being a witch responsible for the Black Plague in Season of the Witch.

Under the Radar: Immigration Tango follows two immigrants living in Miami who meet and fall in love only to discover that both of their visas are about to expire. That’s when they come up with the plan to switch partners with their best friends.

The Idiotbox: Patricia Arquette stars as a mother of three who doubles as a psychic consultant for the police in Medium: The Seventh and Final Season.

Emmy-winner Kyra Sedgwick is a tough-as-nails former Atlanta detective brought in to head the LAPD’s Major Crimes Division in The Closer: The Complete Sixth Season. Sedgwick digs deep to get confessions out of high-profile suspects while navigating inter-departmental politics.

Two former Secret Service agents are tasked with tracking down strange and otherworldly artifacts for the government in Syfy’s Warehouse 13: Season 2.

“Mystery Science Theater 3000” occasionally branched out from their typical sci-fi territory to lampoon other schlock. First Mike and his robot pals take on a German television production of Hamlet starring Maximilian Schell, then join Joel and company for the Roger Corman western Gunslinger.

From Criterion With Love: Like all great surrealist works, Louis Malle’s Black Moon is impossible to encapsulate. A fantastic, post-apocalyptic Freudian allegory with talking animals and gorgeous cinematography, it is by far Malle’s most enigmatic film.

Stranger Than Fiction: Erasing David is a fascinating first-person documentary about an average man who goes on the lam to see if it is possible to disappear in the modern age.

Two brothers travel the world to launch a revolutionary new telescope in a high-altitude balloon in order to reveal the origins of the universe in Blast!.

Michael Flatley returns with a new show in Lord of the Dance?.

Foreign Fare: Shinya Tsukamoto rounds out his techno-horror trilogy with Tetsuo: The Bullet Man. A father’s grief has his body melding with metal, transforming him into something more than human in a quest for revenge.

Max Manus: Man of War is an epic depiction of Norway’s resistance movement in WWII.

Also available: Deliver Us From Evil

Blu Notes: The Lord of the Rings Trilogy: Extended Edition comes to hi-def in a stunning 15-disc set that includes 26 hours of bonus features, including the fly-on-the-wall Costa Botes documentaries that put you on set for probably the biggest undertaking in cinematic history. Regrettably, the set doesn’t also contain the theatrical cuts. ?Cowboy Bebop: The Movie raises the stakes of the terrific anime series about a crew of space-traveling bounty hunters as Spike and the gang try to head off a biochemical attack and claim the astronomical reward.