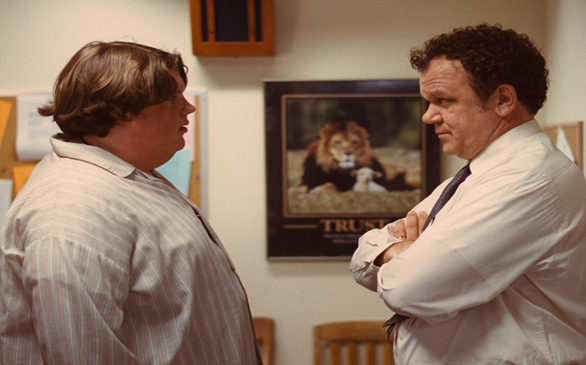 “Why am I fixing my coat?” Creed Bratton asks himself as he sits in a roundtable interview with no cameras around. Playing the ailing but endearingly out-of-it uncle in Terri, “The Office” star’s presence was warm and familiar, yet also a little strange.

When asked how it was like to film this movie, he says in his worldly almost trance-like voice, “I had an epiphany. I thought to myself, ‘This is where I want to be.’ My next thought was, ‘Well, this is where I am.’ And this is probably where I’ll stay.”

It could be that his stint in the wildly successful television show affords him an instant, relaxed relationship with strangers that allows him to be delightfully offbeat, but the same feeling of familiarity can also be observed in the presence of highly-acclaimed actor John C. Reilly and fresh-faced newcomer Jacob Wysocki.

Perhaps it’s because their latest venture together, Terri, is partly responsible. A coming-of-age movie based on the actual experience of coming of age, Terri makes its audience feel warm and familiar, yet also a little strange, just like its cast.

The movie begins with Terri, the protagonist played by Wysocki, as he sits unclothed in the bath while his clearly drugged uncle rambles about cleaning the tub, killing mice in the attic and making steak for breakfast instead of the usual beans over sliced bread. He then goes to school in his pajamas, as he does throughout the rest of the movie.

Wysocki says, “It’s about this person that is, ‘well, it can’t be much worse, so I might as well be comfortable.’”

“Maybe looking the same everyday is a way to protect yourself,” Reilly adds.

The veteran actor explains that although he was an extroverted kid, he was still “this weird guy that did plays” in an athletic high school.

“I’ve gone through similar troubles that Terri has,” Wysocki remarks. “I’ve had similar thoughts like, ‘Why am I being picked on for my size? Why does that make me different?’ I don’t really understand. Why is it, you know, a big deal?”

He continues, “At the same time I was not an outcast in school. I had my own niche. I definitely wasn’t in the same shoes as him, but I can totally relate. There were some moments when it gets a little too familiar. You’re kind of reliving the same emotions. When you come out of it, that’s when it’s weird. You remember all the stuff that you had repressed. You get a little shaky, like ‘whoa that was heavy.’”

The soft-spoken actor does reassure, however, that he “didn’t go nuts or anything.”

Wearing a lived-in band shirt, a nose ring and scruffy hair, young director Azazel Jacobs is reminiscent of Chad, the slight rebellious troublemaker in the movie who becomes Terri’s friend.

He comments, “I like that there is a place for Terri that’s being offered in this story and in this world. That world is as closed and as judgmental as any other, but at least in the story there’s a possibility that he has a whole other place to go to.”

But of course, no adolescence is complete without the burning issue of sexuality. Playing the beautiful and precocious Heather who befriends Terri is 15-year-old actress Olivia Crocicchia. The most experienced of the young actors in the film, Crocicchia has the talent and poise of someone wise beyond her years, but her youthful glow is affecting.

“Filming the movie was like magic!” she jokes with a girlish giggle.

Heather has to deal with serious consequences in the film, and it all culminates in a poignant and powerful scene in the shed, where she, Terri and Chad explore the early stages of experiencing the effects of sex, drugs and alcohol.

“I think kids are going to get into whatever kids want to get into,” Wysocki says.

Reilly chimes in, “[Just pick] whiskey or pill. Not both, because that could have disastrous consequences.” The room fills with laughs.

As a last piece of advice to youth, the actor says, “Just don’t die, [and] don’t get caught.”

He maybe half-joking, but just like the bittersweet story of Terri, that’s as honest as advice can get.