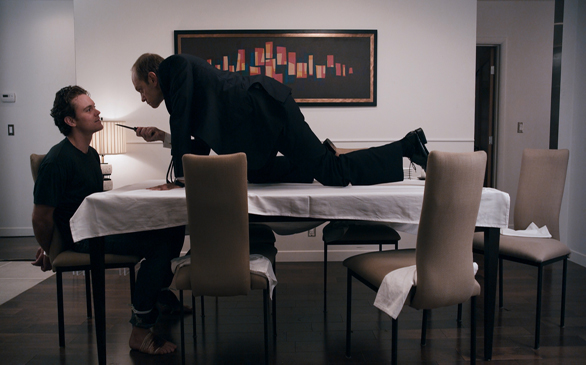 M. Night Shyamalan didn’t invent the plot twist, though he’s received both credit and blame for its ubiquity over the last decade. No, it’s a device as old as time. Before Haley Joel Osment saw dead people and Kevin Spacey’s limp miraculously healed, we were treated to Luke and Anakin’s awkward reunion and Charlton Heston yelling at the Statue of Liberty. The rules for a good twist are as follows: There’s one, it’s big and you don’t see it coming. The Perfect Host, an intriguing dark comedy, falls short of all three.

In Host, John Taylor (Clayne Crawford) is a criminal looking to lay low after a recent bank robbery. He stumbles through suburban Los Angeles to find the house of Warwick Wilson (David Hyde Pierce), a Niles Crane doppelgänger preparing to host a dinner party for a few close friends. Claiming to share a mutual acquaintance, John invites himself in and proceeds to take Warwick hostage, an act less unpleasant than bleeding on Warwick’s floor or making him cancel on his guests. But, as per usual, Warwick isn’t what he seems to be, nor is his party.

Writer-director Nick Tomnay does an excellent job creating the world according to Warwick and showing his distance from reality, while Pierce drives those moments home, hilariously, as the mild-mannered sadist just looking for a good time. His tension-filled exchanges with Crawford make most of the film worthwhile. But, eventually, Tomnay jerks the wheel too often to have any forward momentum, and everything feels like a red herring waiting to be revealed. By the time the end credits roll, you’re just too exhausted by the journey.

Had Tomnay taken a few cues from Michael Haneke, who directed the similar, though much darker and subtler, Funny Games, Host may have been one of the surprisingly satisfying films of the year. But with a girlfriend and a few cops shoehorned in for context, the film loses its way. As it stands it’s a fun film that ultimately tries too hard.

One rule most people forget about plot twists: When you screw with an audience’s reality, you need to leave them wanting more and wondering what happens next. By the end of the film, Host’s bows, much like Pierce’s Windsor knots, are perfectly tied. A lasting question and a little imperfection goes a long way, while too much of both is a disaster. Just ask Shyamalan.