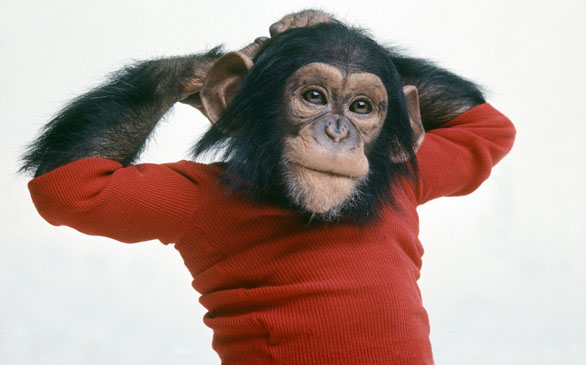 Chimpanzees are used for research all the time. They are used primarily to research vaccines among other relevant studies, but a professor by the name of Herbert Terrace was interested in whether or not chimpanzees could communicate in a way that would be similar to the way humans converse with each other, so he plucked a male from its mother and named it Nim Chimpsky – hence, the project name. He figured that if the chimp was placed within a family and taught sign language then perhaps it would effectively communicate its needs.

Project Nim, directed by James Marsh, tells a story of that chimp’s particular journey, as the researchers involved called it. The film was produced by Simon Chinn who also produced the Oscar-winning Man on Wire that was directed by Marsh. The two work effortlessly in Project Nim to tell the brash story about how the chimpanzee was handed from person to person for the sake of research. Nim was first placed in a home that was occupied by a couple who embrace the animal and treat it as if it were a child, but that is when the tragedy starts. The beauty of the film is that the audience does not realize that until they see what ends up happening to Nim after he has grown. The chimpanzee appears to be cute and cuddly with scenes in which people involved in the project are seen frolicking with him. That was necessary in order to establish a relationship and instill a system of hand gestures that would allow the chimpanzee to express his wants.

There are terrifying scenes during the peak of the documentary that warn the audience of the dangers of making an attempt to civilize a wild animal, and the audience leaves the theater with the notion that it is not a good idea to make such an attempt. The film also looks at how other chimpanzees were used to research a vaccine for Hepatitis C. They were essentially tranquilized to subdue their wild behavior so that the doctors could formulate the vaccine but the audience will probably rush to judgment, which makes the film volatile.

The producer and the director make a well-rounded debate as to whether or not it is appropriate to use such an animal for the sake of humanity. One researcher is filmed as saying that there is no such thing as humane research on animals, and he makes a point by saying that a vaccine or cure cannot be tested on humans first. The film strives to show the audience the fragility between animals and humans, as well as nature.