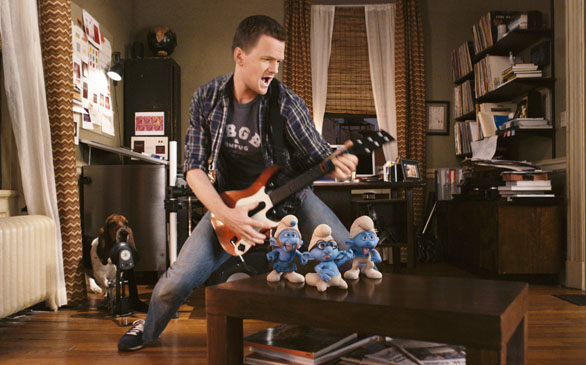 The Smurfs were created in 1958 by Pierre “Peyo” Culliford who was a Belgian artist. He created them for a comic book; they were originally called the Schtroumpfs and became wildly popular. The name was later translated in Dutch, and the Smurfs were introduced to Americans in 1981 as 256 episodes aired as part of ABC’s Saturday morning lineup.

The movie came about when producer Jordan Kerner began writing letters to the Smurfs licensing agent, Lafig. The involvement of Peyo’s daughter, Véronique Culliford, in the movie was extraordinarily important since her father had passed away in 1989.

“We’re based on Peyo’s material and not on the [television] series. Years ago I was at ABC, and I’m always in awe of people who can tell 22 episodes a year and make it work, so there’s no criticism to the series. But Peyo’s books, if you look at them, were very thematic … different than the series,” says Kerner during a press event for the film.

One of Kerner’s requirements before making the movie was to read all of Peyo’s books, which gave him a sense of the Smurfs universe.

The movie stars Jayma Mays as Grace Winslow and Neil Patrick Harris as Patrick Winslow, as well as Hank Azaria as Gargamel.

“I’ve never really played a motherly role before. For me, Grace Winslow was all about that,” says Mays.

The Winslows are a couple whose lives are turned upside down after discovering the Smurfs in their home.

“She’s ready to become a mother, and it just so happens that these little blue creatures come into her life about the same time that she’s about to have a baby. She’s kind of learning how to give good advice and be loving, and I don’t even know that I’ve played somebody so grounded before. I just feel like most characters I played [were] a bit kooky.”

Mays also plays the role of the “kooky” Emma Pillsbury on “Glee,” but the challenges were set for acting in The Smurfs from the beginning. The film was animated by Sony Pictures Animation, and technology had to be created for the movie since the color blue is hard to resonate with light. A special camera was used to sequence scenes, and it wasn’t until several drafts of the script were done when it was determined that only six Smurfs would have prevalent roles in the film.

“It was a big decision. Initially, in the earlier scripts ... there was 45 to 100 Smurfs ... and honestly, the second or third week of shooting I was like, ‘thank God we don’t have 100 Smurfs here’ because I was busy trying staging six on the table top or on the sofa,” says director Raja Gosnell.

The cast for the hybrid live-action and CGI movie was primarily picked after the technical aspects were ironed out. Azaria is mostly known for voicing characters on “The Simpsons,” along with being featured in numerous plays and movies. The character of Gargamel came naturally to him.

“I always start with a voice. They kind of start as an old, failed Shakespearean actor,” he says. “ I found in playing – and I’m going to get in trouble for this – there is a fair amount of my mother in there. I just remember her ... upset and running and yelling at kids a lot. There is some of that in Gargamel. I related to my mother when she was upset with the kids.”

Stickers, along with maquettes, puppets and dots, were used to direct the actor towards the would-be Smurf or Smurfs in any one particular scene.

Mays recalls, “It was getting the technical part right and making sure that you were looking where they think the Smurf was going to be and where it’s moving around, and this can get tricky when there’s about six Smurfs running all around the room and spinning and turning and you don’t know where they are and what sticker is who and all that. It was tricky, but fun.”

“There’s a movie history of a sort of brashness – dare and do – of the Scottish, so I think that we wanted that. We also wanted to have the character defined by his actions but also by how he looked,” says Kerner.

There is also Jokey Smurf and Panicky Smurf. One of the greatest draws for the movie will be the fact that Katy Perry voices Smurfette, who was actually a Smurf created by Gargamel to dissuade and capture the Smurfs before Papa Smurf turned Smurfette into a good Smurf with a magic potion.

“We needed Smurfette, she’s the only girl. She’s the most popular Smurf that there is,” says Gosnell.

The decision on which Smurfs would be woven into the story depended on how the voices of the characters themselves would play into the picture.

The music for the film is inspired by medieval times and Celtic music, and contains instruments from the 14th century. The audience can be sure to hear the Smurfs singing the “La-la-la-la-la” chorus, and there is one scene in which Patrick Winslow is playing the song “Walk This Way” by Aerosmith on “Guitar Hero” while the Smurfs sing along. A tuba and a horn were used to signify Gargamel and his sidekick cat.

The audience will be sure to enjoy the sweeping, 3-D camera views. The movie opens up with a scene in which the audience gets a breathtaking view from a stork flying through the village.

The Smurfs releases in theaters July 29.