Foster the People: Returns to L.A. Under Bigger, Brighter Lights 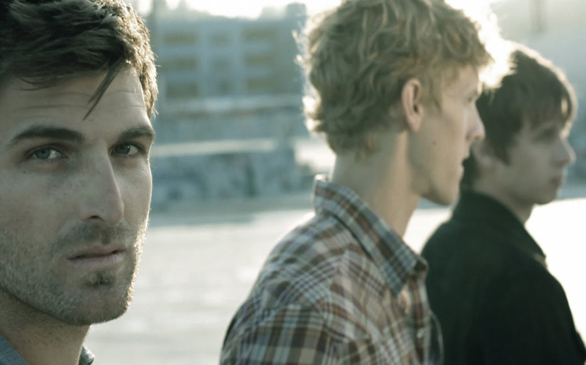 Mark Foster knew his teenage dream couldn’t come true after just a few shows on the road. So while he and four of his friends drove their van through the desert on the way home from South By Southwest, Foster reminded himself to remain patient.

At the time, their hit single, “Pumped Up Kicks,” had just started to gain traction across the blogosphere after being released online in early 2010 to advertise a magazine’s fashion show. But with no representation or record deal in place, Foster was still left trying to convince his band mates that the dream they were chasing would be worth the wait.

“I had to sit down with them,” Foster recalls. “I said, ‘Look, I don’t want to worry about getting a manager or a record label. I don’t want to think about the industry. I know if we just focus on the music and what we love and don’t worry about any of that other stuff, all of it will follow.’”

Less than a year later, it did.

Thanks to that inspiring 2010 performance at SXSW, Foster had those at the Austin festival suddenly buzzing about his little-known indie pop band that was being tabbed under the name, “Foster the People.”

A record deal with Isaac Green’s StarTime International would soon follow, starting with a three-song EP in January that included “Pumped Up Kicks” – the breezy, yet gloomy track on Billboard’s Hot 100 that delves inside the mind of a young killer to address America’s present-day youth violence problem.

Now, with the May 23 release of their debut album, Torches, and its rise to No. 8 on the U.S. pop charts, being on the road feels a little bit easier for Foster the People thanks to the comfort of a brand new tour bus.

“We’re all able to sleep,” Foster says after recounting how the band had to take turns driving the van during a hectic first U.S. tour.

Although, with the way things have progressed so quickly, it’s almost surprising Foster has had any time to sleep at all.

“It’s just crazy,” says the 27-year-old native of Cleveland, who moved to Los Angeles at the age of 18 after his father urged him to pursue his passion for music when he graduated high school. “But … I would be crazy to tell you that I didn’t believe in what I was doing.”

Foster, no doubt, had to work his fair share of odd jobs, from waiting tables around town to composing jingles for television commercials, before his dream could finally be realized. In the meantime, the singer-songwriter worked on writing a collection of songs before eventually recruiting Malbec drummer Mark Pontius and bassist Cubbie Fink to join him in 2009. Since then, he’s added guitarist/keyboardist Sean Cimino and keyboardist/percussionist Isom Innis to the band as live musicians.

“I had all these songs that would have been impossible to play by myself,” Foster says. “We really wanted to build the band around a connection to have fun.”

The multi-instrumentalist Foster hasn’t had trouble keeping with that mantra while exploring his electronic and hip-hop influences in the process, but it’s still hard for him to wrap his head around just how fast things have come together. In fact, just six months ago, Foster the People didn’t even sell out its show at the 400-person Echo. Since then, people have caught on.

With the EP release calming the band’s nerves, a return to South By Southwest and an appearance at Coachella in April helped build some more momentum before the unveiling of Torches and a second U.S. tour, which features a string of sold-out shows this summer.

Two of those sold-out nights for the band will be back home in Los Angeles on July 7-8 at the El Rey Theatre, while a date at the Wiltern in October has also been added. It’s quite the step forward for Foster, who used to attend shows at both landmark venues but never imagined what it would be like to one day headline a concert there.

“I’m probably going to get emotional, man,” he admits about the upcoming performances. “I’m going to have to hold back. Those are places that I have put on a pedestal for so long.”

Though at this rate, it may not be long before Foster’s burgeoning fan base is soon putting him on his own lofty pedestal.