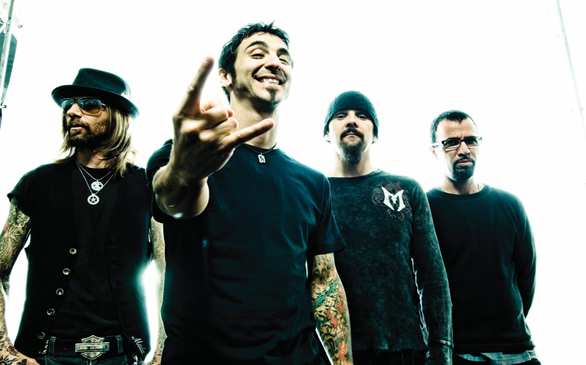 Boston heavy hitters Godsmack are gearing up to launch their co headlining summer tour with Disturbed and Megadeth for the fourth annual Rockstar Mayhem Festival. Their last three albums have consecutively debuted atop the Billboard 200 making them one of the most successful metal bands today. Their latest, The Oracle, is their first album in four years during which they recharged from touring extensively over the past decade. Now, they return with brute force and immense power across North America.

Drummer Shannon Larkin relaxed in the studio as he expressed his excitement for the summer tour. His voice overflowed with exhilaration as he revealed details about the festival.

“Disturbed sent us what their stage show would look like, and they have video screens and pyros throughout the show,” shares Larkin. “So we said, ‘Shit, we’d be silly trying to go after them with just a backdrop and lights.’ But it doesn’t matter. This isn’t a competition. Disturbed are definitely as big as us if not bigger, so we have no problem going before Disturbed. We’ve learned that the 8 p.m. to 9 p.m. slot is the shit, with 15 bands playing all day and 110 degrees in the deserts, people get burnt out by the time the headliner comes out.”

Mayhem Fest features over a dozen acts on multiple stages, including Machine Head and Trivium. Since hearing about the lineup, Larkin has been keeping a close eye on a few bands.

“Trivium and In Flames are two killer metal bands. I’ve been telling people how impressed I am with these up-and-coming bands. Of course Dave from Machine Head and Shawn from Megadeth are top-notch thrash players that I get to watch shred every night. Mike from Disturbed is amazing. It’ll be a drummer fest. It’s great for me, I’ll never be bored.”

Godsmack’s Web site currently lists one show after Mayhem this year. Since frontman Sully Erna is promoting his solo act, they’ve been planning a few dates after.

“We plan on doing two weeks across Canada, which we haven’t done in years. Sully will continue promoting his album, Avalon, on the West Coast, and I’ll do Another Animal with Robbie,” shares Larkin. “When Godsmack isn’t working, we’re all working on something else, it’s just what we do. We’ve got instruments in our hands and we play them constantly, so we are always making music. Whether people like it or not, we’ll see. We just finished a three-song demo with Another Animal. Our claws are out and we’re scratching everything in sight.”

During Ozzfest back in 1997, Larkin achieved his dream by filling in for Mike Bordin as he drummed along Black Sabbath for a one-time event.

“I was on stage with Ozzy, Geezer and Tony playing Sabbath songs I had listened to growing up. The band I always wanted to share a stage with had finally happened,” says Larkin with excitement. “Since I’ve done that, the only thing I could imagine now would be playing with Zeppelin. Jimmy Page, Robert Plant and John Paul Jones – if I could play with them I would be honored. But, If Oasis ever got back together and I could fill in on the drums for them – wow, that’s my favorite band, that would be a dream come true.”

Larkin’s side project, Ugly Kid Joe, reformed last year. The band has reunited and has been creating music when members are available.

“We made six or seven songs in Los Angeles a couple months ago. But we’re controlling our investment, we have no labels or management, we are self-financing everything. That gives us the opportunity to make sure whatever we release, whether it’s an EP or an album, we don’t care. We just want to make great music, and we plan to finish up recording a few more songs towards the end of June in a studio out in New Orleans. It’s one of those rare things where we don’t give a fuck. We are playing for the music. If people don’t like it, choke on it. It’s not like we need the money. We just want to make some snotty punk, epic Ugly Kid Joe shit.”