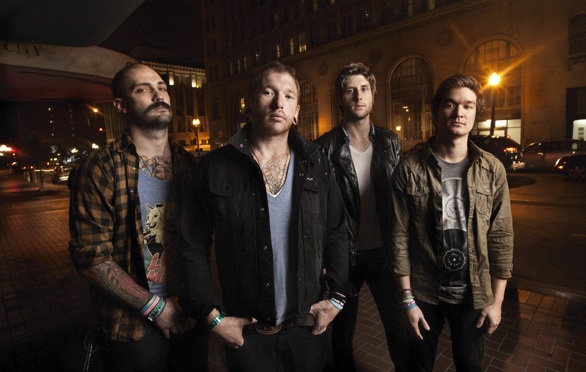 “The older you get, the more cynical you become,” says Go Radio frontman Jason Lancaster.

One look at the scruffy, grizzled and sleeve tattooed vocalist and you might assume he’s talking about himself. Contrary to stereotyping, however, Lancaster couldn’t be more stoked on life right now. He and his band mates, drummer Steven Kopacz, bassist Matt Poulos and guitarist Alex Reed, just released their first full length album this year and are gearing up for a much-hyped stint on this year’s Warped Tour. Despite the band’s grittier musical leanings however, what Lancaster means is that he’s more than OK with having a younger audience demographic.

“A 21-year-old hardcore kid is there to see hardcore music, and if it’s not exactly what he came to see, he’s going to be upset about it,” he says. “But these 15- and 16-year-old girls come out to shows like, ‘I just love music, and I just want to have a good time.’”

While Lancaster may have an uncommon respect for that section of his fan base, rest assured that the band’s brand of infectious pop-punk is anything but children’s music. Infusing the classic piss and vinegar style punk with a little bit of sing-along pop modernization, the foursome have found success in creating a broad and varied fan base in their time together. Neither gender nor genre-specific, the band has become one the faces of a new, improved and all-inclusive punk, with the release of this year’s Lucky Street.

“This record is a lot more grown up for us. It says a lot more about the band, the lives that we lead and how we want to be portrayed,” Lancaster says of the album.

And for Lancaster, the only way to make that happen was with complete honesty in his lyrics.

“I go by the idea that lyrics have to be firsthand. They have to be something you’ve been through. Everything we talk about is something that happened to us, that we lived through, and maybe we wished we didn’t, but we’re here singing about it, telling people and maybe we can help them with it too,” he says.

“The quote I like to live by is ‘Without blood on the sword, the sword is just a toy.’ So many bands out there get songs from other people, or have someone in the band who writes the lyrics but doesn’t sing them, and it just doesn’t come across the same, because they’re telling someone else’s story,” Lancaster adds. “It’s so much more real and involved when someone is standing there, looking you in the eye and telling you the truth about something, rather than just relaying a message.”

Just as with his commitment to having integrity with his songwriting, Lancaster has logged more than his share of hours to show he’s just as committed to the road for his band.

“We did years in a van with this band. My bench in the back was longer than all the other benches and was also the rockiest ride, but I got used to sleeping that way,” he says. “To the point I put my bed at home against the wall that faced the street, so I could lean my back against the wall like a van seat and hear the noise of the road outside, because it was the only way I could go to sleep.”

That’s what separates Go Radio from the majority of other bands in their genre, however. While those bands count down the days until they’re out of their fan and off the road, Lancaster and his band mates don’t function unless they’re in it. And therein lies the key to their longevity.

“Quitting is the easiest thing to do. You just stop,” says Poulos. “What’s hard is to not quit. That’s what sets us apart. It’s been hard for us before, and we’re just now starting to see the other side of that where it’s getting easier.”

Echoing this, Lancaster adds, “I’ve been touring in bands since I was 16 years old, and not all of it was pretty and fun, but I’m still here.”

“Still here” is where Lancaster should be able to say his band is well into the future, but for Go Radio, luck definitely had nothing to do with it.