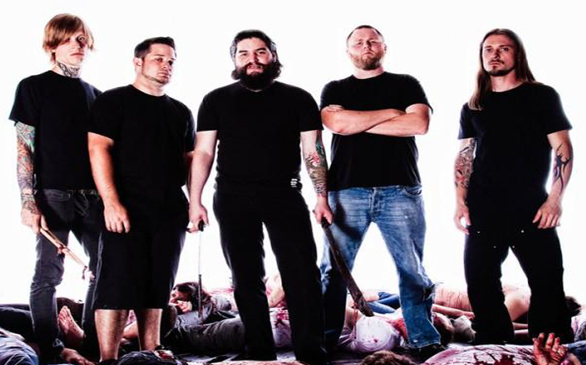 All Shall Perish Autographed Headphones

Northern California extreme metal act All Shall Perish has put together several special pre-order bundles for their forthcoming release This is Where it Ends. Go to bit.ly/aspnbusa to pre-order the new music as a digital download, CD or LP, each bundled with a t-shirt while they last. If you help spread the word about the July 26 release on Twitter and Facebook, you might win a copy of the album and an autographed pair of Skullcandy headphones; find details on the All Shall Perish Facebook page.

Bring up Gardens & Villa in a group conversation, and it’s inevitable that someone will think you’re talking about a magazine that features things like hip new patio furniture. Gardens & Villa isn’t a monthly glossy though; it’s a Santa Barbara-based quintet that plays sublime pop with elements of electro, funk, Brit-pop and even a little bubblegum mixed in. The band’s self-titled debut drops via the Secretly Canadian label on July 5, and you’ll have two chances to hear music from the new album played live when Gardens & Villa hit the El Rey July 7 and the Echo July 14.

There’s nothing quite like a little exotic, tropical music to get you in the mood for summer, and that makes this week’s release of the Red Hot + Rio 2 compilation perfectly timed. The two-CD set of Tropicalia music features 33 original collaborations between legendary Brazilian acts like Tom Ze, Bebel Gilberto, Seu Jorge and Caetano Veloso and indie artists like Madlib, Beck, David Byrne, Beirut and John Legend. Highlights include a match-up of Os Mutantes and Of Montreal for “Bat Macumba,” “Nu Com A Minha Musica” from Marisa Monte, Devendra Banhart and Rodrigo Amarante and not surprisingly, NYC’s Brazilian Girls performing “Aquele Abraco” with Angelique Kidjo and NYC-based Brazilian expatriate group Forro in the Dark. Proceeds from the compilation go to charities that are involved in HIV/AIDS awareness and prevention.

The dozen tracks on The End Records’ Summer 2011 Sampler feature Guano Apes, Anathema, Brendan Perry, Audio Bullys, Badly Drawn Boy, Spirits of the Dead, James Maddock, the Charlatans, Tarja, Sweethead, Too Late the Hero and “Unprofessional Wrestling,” a cut from Art Brut that is not on their recently released Brilliant! Tragic! album. Best of all, the sampler is completely free. Download your copy at amazon.com.

Paul Allender, world-renowned guitarist for the British extreme metal act Cradle of Filth, has updated his online store with the first t-shirt design from his delightfully named graphic design company Vomitorium. You might want to order up on Allender’s “Cthulhu” design if you plan on going to the H.P. Lovecraft Film Festival and CthulhuCon in San Pedro this September since Allender will be one of the event’s featured artists. Allender is also busy musically collaborating with DJ Unwind, and they’ve just released a tune called “Indigo.” facebook.com/vomitoriumltd.

DJ duo Thievery Corporation has just released their sixth album, Culture of Fear. The guys will be playing a few U.S. dates this fall, but no L.A. show has been announced yet.

Singer-songwriter Graham Colton has a new album out called Pacific Coast Eyes, and you can hear music from the album when Colton appears at the Hotel Café July 9.

The Bangles are attempting a comeback after an eight-year hiatus. Susanna Hoffs, Vicki Peterson and Debbi Peterson have signed with Model Music Group and will release Sweetheart of the Sun on Sept. 13.

Singer-songwriter Peter Bradley Adams is drawing high praise for his fourth and latest album Between Us, and you can hear the new music live when he plays the Hotel Café July 21.