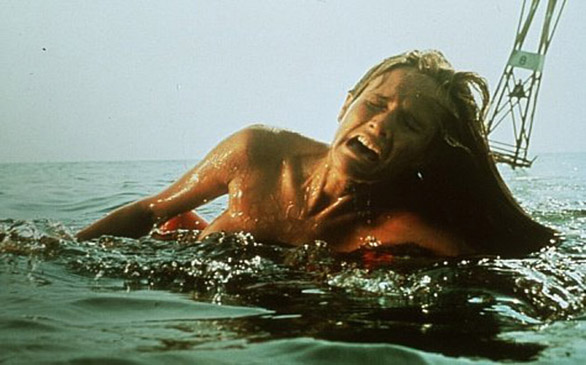 By now, summer is full-blown, and a fun agenda would be nothing without flesh-eating sea creatures, uninhibited celebration and old Hollywood glam. Thankfully, living in Los Angeles allows us to do all of the above. Not taking advantage would be a shame, because before you know it, the slightly less favorable temperatures of autumn will be upon us yet again.

No genre during the summer, when the Southern California water is nice and warm, is more fitting than one about deadly sea creatures out for human flesh. The folks at American Cinematheque figured so, hence they are screening a double feature of Jaws and Piranha.

The 1975 thriller Jaws tops many lists of scariest movies of all time and rightfully so. The film is set on a July 4th weekend in a New England beach town, where unsuspecting sunbathers get the surprise of their lives when a hungry great white shark goes on a chomping spree like, well, a shark in a buffet.

“There is something strange in the water in the Lost River Lake,” an eery voice narrates in the trailer of 1978 film Piranhas, “something you can’t see, something you can’t feel, until it’s too late.” That something strange happens to be a school of deadly fish that will strip you to the bone. Three years after the release of Jaws, screenwriter John Sayles and director Joe Dante created another movie to stir up your innermost irrational fear of water you didn’t know you had.

The same empowered spirit is behind the film festival, which, in its 29th year still leads in “spotlighting emerging talent, creating community between filmmakers and audiences and offering a world-class forum for stories that reflect and often transform LGBT lives.”

Outfest 2011 kicks off with the premiere of Gun Hill Road, a film about an ex-con who returns home to an estranged wife and a teenage son named Michael, now known as Vanessa. The fest promises a fabulous afterparty post-screening in the California Market Center. Other highlights include showings of Codependent Lesbian Space Alien Seeks Same, a comedy catered to men, women and extraterrestrials alike, and Dolly, a movie about the escapades of twin brothers in their pursuit to meet Dolly Parton.

Fenton Bailey and Randy Barbato will be presented the 15th Annual Outfest Achievement Award for their propelling works as part of the LGBT community. The pair, with a background in ’80s punk as a disco pop rock duo, has worked in various projects such as “The Real Ellen Story,” Party Monster, “RuPaul’s Drag Race” and the upcoming documentary Becoming Chaz.

The American Cinematheque invites you to momentarily leave the world where Netflix reigns supreme and be transported back in time to experience “Old Hollywood.” The historic tour leads you through vintage dressing rooms, singer’s boxes and the projection booth, all of which will surely inspire wistful nostalgia for the cinema-going joys of the olden days.

Conclude your journey by seeing the movie Forever Hollywood, which includes a narration by Sharon Stone and exclusive interviews with iconic greats such as Clint Eastwood, Quentin Tarantino, Shirley MacLaine and Steven Spielberg. The 35mm movie also features clips from American films throughout the history of the industry and footages and home movies of the stars.