USC No. 25 Patrick Hall: A Temporary Setback, for a Major Comeback 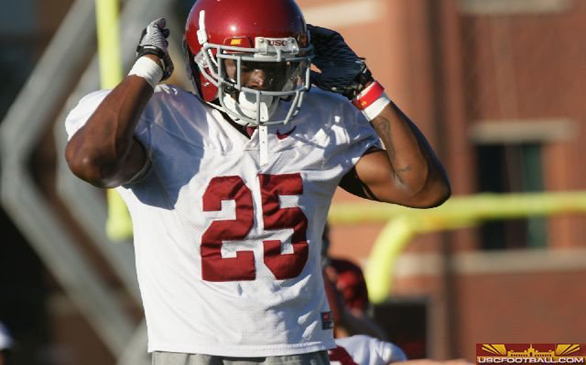 “@ the doctor waiting on my surgery date … minor setback for a major comeback,” USC cornerback Patrick Hall, posted on his Facebook June 16, after tearing his ACL in his left knee at a players only practice.

Hall had just caught an interception when he landed in an awkward position, thus tearing his ACL. Although he was able to walk off the field, he knew the severity of what had just happened.

Hall was part of former head coach Pete Carroll’s final recruiting class of 2009. The Ventura, Calif. native was the No. 2 athlete and No. 19 player overall in the country, according to Rivals.com.

This highly proclaimed player out of St. Bonaventure High has been faced with an uphill battle since coming to USC. Aside from injuries, Hall was also suspended indefinitely last season by head coach Lane Kiffin, due to academic reasons.

Since Hall is a fighter, he returned to the practice field three weeks after, on what Kiffin had said was improved behavior. It seemed Hall had found the reasons why he continued to fight on.

“I had my head in the wrong place,” Hall says. “I got a lot of people looking forward to seeing me on the field, a lot to prove looking back at ranks, and I had to do it for my family.”

In the past two years, this is the second serious injury Hall has had since becoming part of the Trojan Family. He previously tore his ACL in his right knee, during his only practice of the Trojans 2009 Fall Camp. Once Hall recovered he redshirted during the 2010 season, and still continued to rehabilitate his knee.

As for his current injury, Hall is scheduled for surgery on June 30 and is looking at a nine-month recovery period where he will miss the 2011 season. Looking to stay positive, doctors have told him he should be able to practice in full pads by next March and be ready for the 2012 season.

“I have to stay positive about it, there’s no point in beating myself up, I get an extra year [where] I can learn playbook more and come back stronger for that starting spot,” Hall says. “My teammates, they look forward to me being on the field … also my family, they keep me spiritually wise and make sure my head is on straight so I won’t let this bring me down.”

Having missed two complete seasons due to injury, Hall will petition for a sixth year of eligibility. If allowed, he would have three years of playing time remaining as of 2012.

Although a great cornerback on the field, Hall wouldn’t mind changing positions.

“I would love to play running back,” Hall says, laughing. “But [regardless] once I get out there all I got to do is play ball and continue to work hard as I’m doing now … it’s just what I know; it’s what I love to do.”

Even though he won’t be practicing anytime soon, that’s not keeping this player off the field. He continues to work out as well as coach the younger players coming in. He says, “I’m playing that role” of a student and a teacher; a coach and a player.

Hall will be turning 20 next month and says he has already begun to look forward to his future outside of football. After speaking with graduate assistant Sammy Knight, he plans to pursue a master’s degree in Communications.

It’s all or nothing in the game of football. It’s a sport built on perseverance, heart, stamina, durability and effort, characteristics that Hall lives and breathes; he’s just waiting on his chance to shine.

“I feel this is all a sign that it’s not my time yet, I just got to wait my turn and make the most out of it once I get my shot,” Hall says. “I haven’t gotten a chance to prove myself on the field, but once given that chance I’m going to show out.”