Getting Carried Away: “True Blood”’s Carrie Preston does it all. 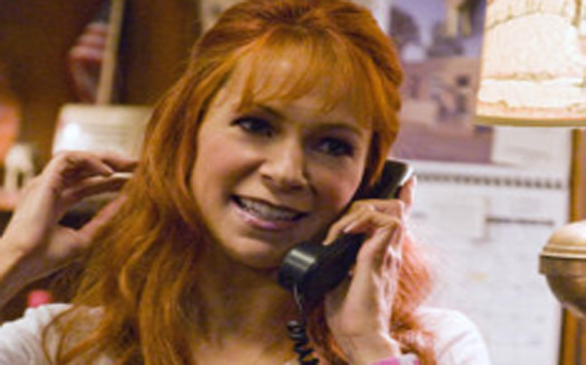 Hollywood: the smallest of worlds.

After living here for most of the 2000s, I have repeatedly learned that inevitable lesson: The more people you know, the more they know other people you know. That casting director you always flirted with? He’s taking a cooking class with your old boss. The assistant who accidently hung up on you during a conference call? Her script is now being produced by the ex of your BFF, who just joined a writers group with that flaky vegan you met at Coachella last year…

While chatting with “True Blood’”s Carrie Preston (Arlene, Merlotte’s pregnant and baby-daddyless waitress), the it’s-a-small-worldness became apparent after we established several distinct degrees of separation between us. First, there’s our mutual actor-director friend whom we both love. Then, there’s the producer who worked on Preston’s latest indie (A Bag of Hammers) and worked with me during my stint at a commercial production company. And finally, there’s my friend of a friend who’s on the writing staff of HBO’s bloodsucker saga.

This round of friendly connect-the-dots made me wonder: What other acquaintances would Facebook tell us we have in common?

Connections aside, I couldn’t help but admire the actress for maintaining her sense of calm during what’s lining up to be a busy summer for her. There’s the comedy on which she’s putting the finishing touches, That’s What She Said, a Bridesmaids-esque romp that marks her second time as a feature film director (“It’s a womance. It’s a chick flick that’s not for pussies. It takes the genre and mashes it with the balls-to-the-wall outrageousness of a bromance with the girls coming out on top.”). Then there’s the aforementioned Hammers, a film starring Jason Ritter about two slacker con-artists who unexpectedly find themselves to be the guardians of an infant.

“What appears as a bromance turns into something much more complicated and serious,” she says. “It’s a movie about alternative parenting.”

And of course there’s that small supernatural show about vampires and the women who love them. Naturally, when I ask what fans can expect in the just-premiered fourth season of “True Blood,” Preston can’t reveal much – most likely due to some heavy non-disclosure agreements she and the rest of the cast signed for HBO and series creator Alan Ball. The last time we saw her character, Arlene, her pregnancy ran into some Wiccan interference, thanks to the scheming Holly.

“She’s definitely continuing to deal with that issue,” Preston hints. “It’s an exciting place we’re going to go to.”

Also exciting is where the rest of the show is headed. “We just had a table read of the final episode [of the fourth season],” she says, teasing me with the promise that the hit drama is diving into a couple of storylines never done before on the series.

Perhaps it’s the show’s attempt to stand out from the monster mash that’s dominating television. With “The Vampire Diaries” steaming up the CW, “Teen Wolf” tearing the MTV audience to shreds and “Being Human” gaining cult status over at Syfy, “True Blood” appears to be pulling out all the stops to keep viewers hooked on its supernatural sex appeal.

“I think we live in a youth-obsessed culture, and here are these creatures that get to live forever … they’re young and hot and sexy, and they get to stay that way forever,” Preston muses. “I think that taps into something that’s going on in the psyche of the American audience … and it’s fun to see what it would feel like to be devoured by the object of your affection, or to devour the object of your affection … It’s just really sexy – and naughty.”

Now that the show is seen all over the world, Preston’s got Twitter followers from across the globe and is enjoying the ride while focusing on smaller scaled projects that make her just as happy. Hence, A Bag of Hammers, a perfect little independent film she knew she wanted to be a part of when she read its irresistible script.

“As an actor, it’s always more interesting to play a character who’s struggling against something … I will go and do a film at whatever budget if I connect with the character,” she shares. “Doing the smaller films is more akin to doing plays. You have fewer resources than you would on a big film, so there’s more sense of camaraderie. The scale is smaller, so there’s an intimacy there … I’ve always been drawn to that.”

“True Blood” airs Sundays at 9 p.m. on HBO. A Bag of Hammers releases in select theaters in August.

The Channel Surfer
Oh The "Horror"!: Ryan Murphy returns to his twisted roots on FX.
2,228 views

The Channel Surfer
Room With a Boo: “Bedlam” amps up the scares on BBC America.
2,458 views