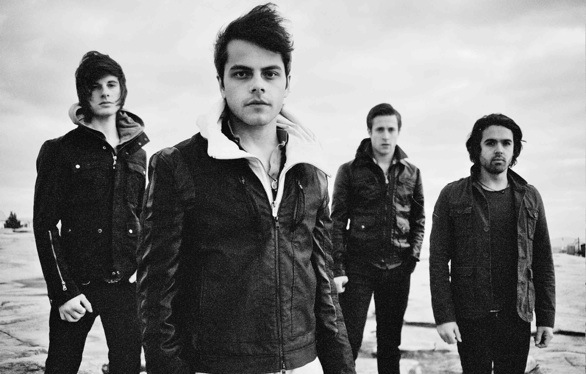 There for Tomorrow
(Credit: Gage Young)

It happens every summer. Warped Tour rolls around and you’re caught in an age-old dilemma suffered by all annual festival shows. Do you decide you want to be that guy and spend your time reminiscing about how things used to be or do you accept that sometimes change really is for the best? While this year’s Warped lineup is admittedly light on both old-schoolers and arena-level headliners, the fresh blood being added this year is without question the best the tour has seen in years. Given that the tour is now in its 17th year, it’s quite a testament to Kevin Lyman’s continued ability to still know good young bands when he sees them. So, as is our annual tradition, we present the top 11 bands not to miss on the 2011 Vans Warped Tour.

11) Hellogoodbye (Pomona and Ventura only)

There was a time when Hellogoodbye wore a lot of neon and were a little difficult to take seriously sometimes, despite their highly skilled musicianship. In more recent times, however, the homegrown SoCal band matured from run of the mill power pop to take a very legit-sounding indie direction. They haven’t lost the signature fun atmosphere that has defined their music, but now you don’t have to feel like you raided your kid sister’s iPod for music.

This is what pop-punk should be. Fun, catchy rock with big guitars and anthemic vocals … that still feels like it’s being performed by grown-ups, who actually have the life experience to mean what they say lyrically. The Florida foursome’s brand of rock was meant to be both sing and yelled along to, managing to effortlessly walk that fine line between catchy and hard rocking.

Every Avenue has always been a good band, though slightly underrated and easily lost amid the countless other similar sounding bands, even if those other bands were less skilled. If the band’s newest material is any indication, however, all that’s about to change. A little less pop-friendly than their previous work, the lead single from their forthcoming album looks like the band is exploring the grittier side of the rock spectrum, and just might be doing their best work yet.

Given that Warped is inexplicably void of Doomtree representatives this year, young up-and-comer Grieves is doing the very honorable duty of holding down the indie hip-hop fort in their absence. Just like his fellow Rhymesayers labelmates Atmosphere and POS, both Warped vets as well, Seattle-based Grieves is a master wordsmith and beatsmith. Whether taking the dark and moody path to introspection, being poignantly critical of his surrounding culture, or lightheartedly nostalgic, Grieves rhymes are relatable above all else. Infectiously catchy while at times being heartbreakingly real with his emotional honesty, Grieves is both raw and unfiltered when it comes to saying what he thinks and how he feels. With none of the egotism that plagues so much of hip-hop, watch a Grieves set and you’ll swear you just had a one-on-one bonding session with him by the time he’s done.

For as much as the faces and dominant genres of Warped have evolved over the years since the tour started, from ska to pop-punk to metal and hardcore, one thing Warped has yet to really tap into was the folk and southern rock corners of the scene. Who better for the tour to get in order to diversify its lineup than Lucero though? Feel free to rail against the tour’s pop leanings as much as you like, this palate expansion is real change we can believe in.

Though each of the bands on this list brings something unique to the Warped table and are arguably the top of their game at their respective genres and styles, D.R.U.G.S. is without question the most intense live show Warped has to offer this year. If there’s one thing frontman Craig Owens knows how to do and never fails at, it’s singing like he really effin’ means it. And now that he’s got a full band that can actually match his level of stage intensity and his musicianship, you can bet he’s going to do some damage when he takes stage.

For everyone who wants to say that Warped is all about bands who just posture and try too hard to look like rock stars, the Dangerous Summer is the light at the end of the tunnel. Straightforward and pretension-free, the guitar-driven melodic rock band doesn’t need to fit into a scene, or have a specific wardrobe, or carry any kind of attitude in order to have worthwhile music. Though front man AJ Perdomo’s Max Bemis-esque vocal style is very singalong-able, the band is most definitely not your standard adult contemporary pop-rock fare. Emotional honesty with intelligent lyricism and anthemic instrumentation, the Maryland band doesn’t need to resort to snarky adolescent humor in order to make their point, though they’re also criminally underrated for that ability.

If you were looking for something a little more artsy in your Warped day, the post-hardcore bands might not be the best place to start. The bands on the tour that do self-identify as a part of that scene don’t really have the best gauge of good musical taste, and may or may not actually know anything about the genre. Luckily, Westchester-bred Moving Mountains bring a little artistry and emotionality with their brand of hard-edged rock. Whether delicately crooning out his words or cutting loose with gritty howling, vocalist Gregory Dunn is emotive above all else. On par with the likes of Thrice’s Dustin Kensrue or Brand New’s Jesse Lacey in his ability to do so, Dunn is backed by band mates who are similarly pros at setting an emotional atmosphere with their instrumentation. From slow and spacey to furiously aggressive, together the foursome can intensify whatever mood they’ve taken on for a song without even needing a single lyrical word, a testament to their cohesive musicianship.

On a lineup where talking about how punk rock “used to be” evokes images of the not so distant nasal-voiced and adolescence-themed past, Against Me! continues to do the altruistic work of reminding kids punk did indeed exist before 1999. Despite consistently taking a very grown-up, traditionalist approach to their brand of punk, the Florida native elder statesman of the tour are still one of the most infectiously catchy bands on the lineup. Just … slightly less sing-along, a little more yell-along. Front man Tom Gabel’s signature whisky-soaked howling never fails to bring out the inner anti-establishment-ist in everyone, and is proof that the concept of punk isn’t just for kids these days.

Every year Warped introduces a lot of up-and-coming bands, the vast majority of which aren’t worth their hype and will most likely have been forgotten by the next year’s tour. But this time, Warped has got it right. And while there are some well-seasoned and highly skilled veteran bands on this year’s lineup, the Florida natives are the definitive band not to miss on Warped ’11.

Having graduated from their position as pop-punk pack leaders into full-fledged rock ‘n’ roll heavyweights, the foursome could teach even some of their more senior tour mates the right way to do melodic rock. Powerhouse vocalist Maika Maile can easily be counted among the best singers to have ever graced a Warped stage, and guitarist Christian Climer could teach the master class in emotive shredding, with the entirety of the band possessing a skill level that is far beyond their years. Bringing both artistry and intellectualism to a genre that has largely been lacking both, these dudes just get what it means to really be a musician. Their new album is assuredly the most epically big-sounding record you’ll listen to this year, meaning their live show promises to likewise be the most infectiously in-your-face set Warped has to offer.

Even despite the fact that they’re not a prototypical Warped band, nor have they ever been, Gym Class Heroes have always embodied the most basic tenants of what it means to be a part of this scene. Though they’re unquestionably masters of seamlessly mixing rock, pop and hip-hop, the foursome’s strength has always lied in their ability to bring the real-talk of the former genre with the fun, feel-good atmosphere if the latter two.

Frontman Travis McCoy is a skillful lyricist, but an even greater performer when it comes to bringing a party atmosphere while still having something real to say on stage. What that means is that a Gym Class performance makes for one of the most fun sets of any show while still giving audiences something to think about afterward.

Warped Tour is July 1 in Pomona, July 3 in Ventura and Aug. 10 in Dominguez Hills. For more information, visit vanswarpedtour.com.