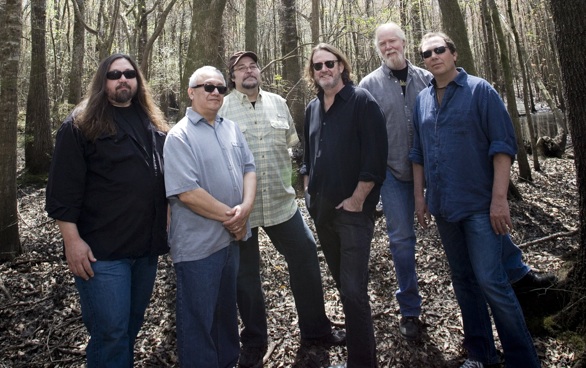 See Widespread Panic July 13 & 14 at the Wiltern.
With his destination still hours away, Domingo Ortiz could feel the open road wearing on him. At the time, he had just left Austin, the self-professed “Live Music Capital of the World,” where he had played alongside some of the best musicians in town for more than a decade. Yet Ortiz, who had taught himself how to play the drums as a teenager and later earned the nickname “Sunny” for his luminous smile, was also ready for a big change.

Ortiz’s years in Austin had made him feel like a part of the local music scene, but with none of the current projects he was working on materializing into much, he couldn’t convince himself any longer that he had really been working in “the business.” So the native Texan packed up his belongings in an ’82 Honda Civic and hit the road for Athens, Ga., in search of a fresh start.

It was a Monday afternoon when Ortiz finally arrived in the bustling college town roughly 70 miles east of Atlanta, and the only thing that was on his mind after a 16-hour trek through the Deep South was finding a cozy bed to spend the night in. Before he did that, Ortiz figured he would stop in the Uptown Lounge, a club his friend, Kyle Pilgrim, had owned, to scope out the scene. Pilgrim, though, wasn’t about to let his friend just stand in the corner and watch.

After some persistent prodding, a wearied and reluctant Ortiz eventually agreed to sit in with the local band, a young rock quartet by the name of “Widespread Panic,” scheduled to play that night. Several hours later, Ortiz had already discovered something he never had while in Austin.

Now, more than a quarter of a century later, that same feeling still radiates between the 59-year-old percussionist and his five other band mates. It’s what has kept Widespread Panic – composed of guitarist/singer John Bell, bassist Dave Schools, drummer Todd Nance, guitarist Jimmy Herring, keyboardist John “JoJo” Hermann and Ortiz – in the game for long enough to have a 25th anniversary tour, which features two nights in Los Angeles at the historic Wiltern Theatre on July 13-14.

Of course, no band could have lasted this long without the extensive fan base that Widespread has established since its start in 1986. While it may be uncharacteristic to see businessmen in suits and ties standing next to hippies in Birkenstocks and tie-dye T-shirts at a rock concert, it’s not with this outfit.

“These folks know how to create a parking lot scene,” Ortiz says.

In a city like Los Angeles, that’s not always an easy task to accomplish. For as many music venues as the city has, very few lend themselves to an environment where a parking lot suddenly transforms into a county fair.

And of the smaller venues in Los Angeles, one that can still offer a taste of that scene is the Wiltern. The parking lot directly behind the 80-year-old theater, in fact, has been widely known as a locale where fans come together to bond before shows.

“It’s really special to us to be called back to the Wiltern,” Ortiz admits. “We’ll probably have some special guest play that lives in the area.”

While Ortiz wouldn’t say whom it might be, the parking lot scene wasn’t always attached to Widespread Panic’s billing. Back in the late ’80s, the band first made its name in fraternity and sorority houses throughout the South. Widespread has come a long way since then. From multiple tours across Europe to sold-out shows at Red Rocks Amphitheatre in Colorado and Philips Arena in Atlanta (They hold the record for both venues at 38 and 17, respectively.), Ortiz and his buddies have performed on some of music’s most hallowed grounds.

For a band where album sales come next to last on the priority list (They’ve sold only three million albums total.), Widespread Panic has gotten the job done through word of mouth and endless touring, playing over 100 shows a year on a regular basis and occasionally surpassing the 200 mark.

“Each day we come out on tour, it’s always a fresh new day,” Ortiz explains. “Everything is always by the seat of our pants.”

Moreover, there aren’t many bands that can create a perpetual buzz for themselves and also share their fans’ enthusiasm with groups that came before them. Widespread did that back in the early ’90s while opening up for such jam heavyweights as Phish and the Spin Doctors at the H.O.R.D.E. Festival. Better yet, you won’t find too many bands with a rule for their live performances as steadfast as Widespread Panic’s, having never played the same exact set twice.

It’s all made possible thanks to Garrie Vereen, one of the band’s roadies who compiles a master list with every song on it and before each show highlights the previous three setlists so the group members can decide which songs they’ll play next. That ritualistic process happens at least two more times on a given night – between the first and second sets and prior to the encore – before Widespread leaves the stage.

With their fans subsequently always on the edge of their seats, it’s been easy for Ortiz and company to keep them guessing all these years.

“There’s never a dull moment when you’re out here with Widespread Panic,” Ortiz says. “We always like to throw curveballs, not only to our fans, but also to each other.”

One of those curveballs came last year, when rumors began to swirl that the band would be going on a hiatus in 2012. Ortiz refutes such claims and points to next year’s four-night run in Cancun, Mexico, a first for the band, but Widespread Panic does expect to scale back its touring going forward.

For now, though, they’re just going to enjoy the ride.