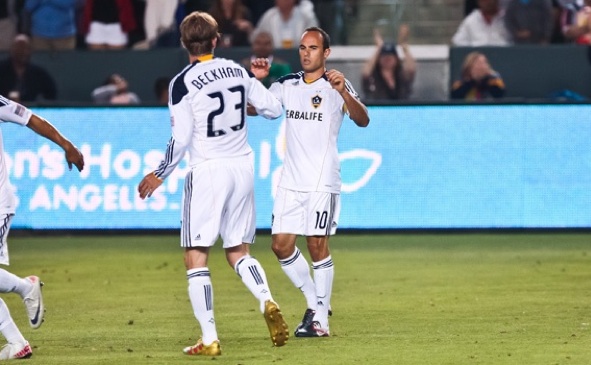 Los Angeles (10-2-9, 39 points) is coming off a thrilling 2-1 victory over the visiting Chicago Fire at the Home Depot Center in Carson before 21,762 fans. The win is their second this season against Chicago, thus sweeping the series of two matches after having captured the April 17 match by an identical 2-1 score.

After a scoreless first half, midfielder and captain Landon Donovan secured his ninth goal of the season. With David Beckham delivering a perfect chopped ball into the box from the right-flank corner line, Donovan managed a fiery header past the Fire goalkeeper in the 58th minute.

“Tonight was the night where I was going to be one of the guys in the box attacking. I try to vary my positions, vary my runs,” Donovan says. “That one, I kind of just drifted to the far post. I like to see the ball like that and attack it.”

The score lifts Donovan to an MLS-best tie with New York Bulls’ Thierry Henry; both Donovan and Henry are having MVP-type seasons thus far. Beckham received the assist, improving his mark to eight.

Three minutes after the Fire’s Cristian Nazarit netted a tie with his goal, Beckham did what he does best. Bending the ball from a corner off the left flank, Beckham squeezed his shot into the back of the net while giving the Galaxy the 2-1 lead and eventual game winner.

Beckham, Donovan and the Galaxy play host to Real Madrid, who will have Cristiano Ronaldo and Kaká available to play, on Saturday, July 16, at the Los Angeles Coliseum at 7 p.m. as part of the Herbalife World Football Challenge.