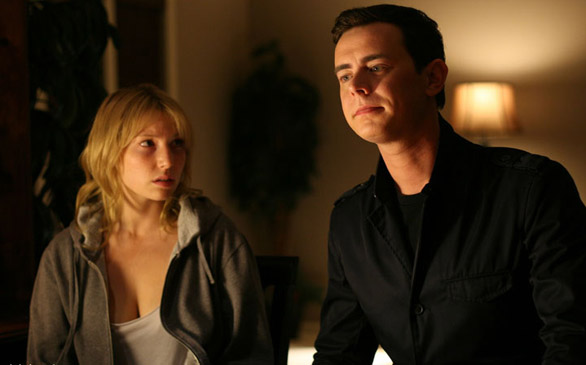 Everyone dreams of winning the lottery. The huge mansion, the new luxury vehicles, the five star vacations – the only thing missing is someone to share this extravagant lifestyle with. Sometimes when you least expect it, dreams do come true. For Benjamin Keller (Colin Hanks) in Lucky, they did. The catch? The winning ticket belongs to Leslie, the dead girl in his closet.

Have you ever heard that when you win the lottery, your life totally changes? Well, they’re not lying. Hanks, Ari Graynor, Jeffrey Tambor and Emmy Award-winning Ann-Margret star in Lucky. It debuted at the Dallas International Film Fest and it looks like Dallas got it right again.

Lucky is the story of an ordinary man who wins $36 million in the lottery. He soon finds his childhood crush, Lucy, suddenly obtainable. It seems he has it all now: a storybook wedding, a romantic honeymoon in the tropics, the woman of his dreams. But his good fortune seems to conjure up something dark within him – something as dark as killing women who resemble his new bride.

Before he murders, he becomes disoriented, seeing everyone as if they had Lucy’s head. To our surprise, it turns out his wife Lucy (Graynor) knows of his unspeakable habit and does whatever she can to cover it up. She even goes as far as to ‘cover up’ a few bodies. That’s one of the first signs that she is actually falling in love with Ben. Up until that point, her motives have been uniquely money driven.

Throughout the majority of the movie we follow the tension as Ben and Lucy struggle to manage their lottery installments. In fact, they blow a huge sum of money within the first three months. Perhaps the stress of it all contributes to Ben’s need to terminate a few relationships. Then again, it can’t be easy managing your money when your busy burying bodies.

Whatever images you may have of Hanks, prepare to have them shattered. This may be the role that allows Hanks to break free of the ‘nice guy’ persona that Hollywood wants Tom’s son to conform to.

Hanks explains: “It was a chance to do something different while being funny at the same time. It was a chance for me to create two versions of the same character. There’s pre-lottery Ben, there’s nothing all that special about him. Then he wins the lottery and puts on a façade as he tries to win the favor of his life-long crush.”

A movie this dark can’t be funny unless there is clear direction in the script. “Tone was always a big thing. When we were going through rehearsals, Ari, Gil (Cates, Jr. [the director]) and I talked a lot about what are we really trying to do with this scene – wanting to make sure that we were all on the same page. Dark comedies can be very hard to read, the first time you read it.”

Also, it doesn’t hurt to have unmatched chemistry amongst the cast.

“Ari Graynor is so good in this movie, tremendously talented, a lot of fun and easy to work with. It was really fun to watch her work. My job was really just to react off of her. Ann-Margret is ANN-MARGRET. That is a special thing, when you get to make a movie with Ann-Margret – a once in a lifetime opportunity. That was a treat!” notes Hanks.

As great as the movie is, it was a hard sell to the studios. All in all, it took eight years from start to finish for the movie to end up on the big screen. During that time Cates directed three other projects. Though I doubt Cates will have the same trouble with future movies.

This isn’t the last you’ll see of Hanks’ dark side. The actor, it seems, has a real thing for serial killers. He’s already set to be featured in the upcoming season of “Dexter.”