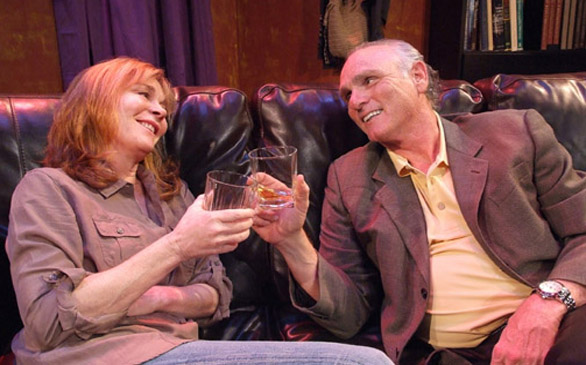 Drama. Thrills. Comedy. Romance. Action. Now playing at Skylight Theatre in Los Feliz, “A Death in Colombia” has it all.

A play by Shem Bitterman and directed by Steve Zuckerman, “A Death in Colombia” is very cool for its story and great cast. The gifted Joe Regalbuto plays Roger, a scary and unpredictable CIA agent. Both beauties in Roger’s life, Roxanne Hart (Lisa) and Sarah Foret (Natalie), are beyond spectacular.

Set in early July of 2002 in the Colombian capital city of Bogota after the election of a new president, the play deals with Lisa, the wife of an activist who has gone missing in the northeast jungles the last three weeks. But has John really gone missing? No.

“A Death in Colombia” begins with a dramatic discussion between Lisa and Natalie, a 21-year old supporter of John’s political views. Natalie is John’s lover as well, and when she confesses this, Lisa quickly delivers a vicious slap to Natalie’s face. A mysterious man, Roger, appears at the front door minutes after Lisa kicks Natalie out of her home.

At first, Roger appears to be a charming, eloquent and vividly intelligent man who makes a pass at Lisa. Claiming that he is John’s longtime friend, Lisa does not buy it at first or eventually at all. However, John does present valid data that sounds convincing.

But Lisa is suspicious enough to catch a lie, which in this case reveals Roger as a top agent for the CIA. Consequently, Roger soon reveals that John is not missing. However, John is hiding from public view for his official roles as a CIA agent himself.

Civil war in Colombia is the cause of this particular situation, a battle between the formal government and the Marxist inspired. So, Roger states that John fakes his death to further develop his duties. Lisa is appalled, even more because of Roger’s offer for her to become an agent. A series of unfortunate and dramatically thrilling events lead to Lisa’s killing by Roger, who was in love with her.