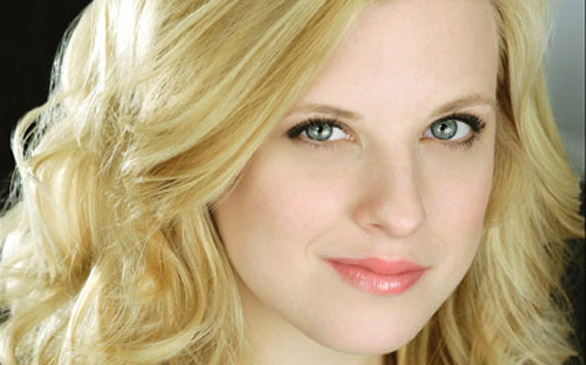 We all know the story quite well. In fact, we can safely assume that it is universally popular. Yes, this is Shrek. Remember?

In Shrek, there is comedy, there is drama, there is adventure and there is romance. Now, there is singing in Hollywood. “Shrek the Musical” arrives at the Pantages Theatre for rest of the month.

In preparation for the stage production, let’s get to know one of its cast members, Sarah Peak, a 27-year-old theater actress who began her career at the collegiate level when attending Northern Kentucky University. Louisville, Ky. born and raised, Peak found her passion for theater while attaining a Bachelor of Fine Arts in Musical Theatre at NKU’s Department of Theatre & Dance.

“It was perfect for me because I was an hour and a half away from home,” Peak says. “Because I was in musical theatre, I was in shows all the time … the faculty had many opportunities for the students and for performing, you need that hands-on experience, so I really think I got that at NKU.”

Peak, who has four sisters, one brother and is happily getting married later this summer, is thrilled to be in the cast that is visiting the L.A. area.

“I am really excited,” she says. “I have never spent a substantial amount of time there; everyone keeps telling me how wonderful the Pantages is and about all sorts of things to do in the area. So, I am looking forward to it.”

“Shrek the Musical” is a concept that was brought to light by acclaimed film director Sam Mendes (Away We Go, Road to Perdition, American Beauty, Revolutionary Road). Mendes, the ex-husband of popular actress Kate Winslet, is a big fan of the first Shrek film. As the first sequel was in the making, Mendes illustrated the musical idea to DreamWorks Animation’s CEO Jeffrey Katzenberg. And it has been very successful, to say the least.

“The first Shrek film came out 10 years ago, and I for sure saw and loved it,” Peak says. “I think they are fantastic and hilarious.”

“Shrek the Musical,” directed by the Tony Award-nominated Jason Moore, is based on the Oscar-winning movie Shrek, the comical story of an ogre. The story and characters originally come from William Steig’s book, Shrek! In this fun and exciting musical play, Eric Petersen, a proud graduate of Bradley University, is the lovable Shrek. Petersen acts, sings and dances as everyone’s favorite hilarious ogre.

In a faraway land, Shrek comes to the rescue of Princess Fiona, played by Haven Burton. Add the Donkey and a villain, and you have Shrek. “Shrek the Musical” is even better for its vivid live energy on the stage, comical charisma, passionate romance, solid dancing, above par acting and wonderful singing.

Also included in the musical cast are Allan Mingo Jr. as Donkey, David F.M. Vaughn as Lord Farquaad and Joe Abraham as Swing, among others.

“Shrek the Musical” is for anyone, really. Peak supports that.

“It caters to such a huge audience. The demographic is from children to adults, because they love the humor,” she says.

Peak is no stranger to theater, as she played Holly in the first national tour of “The Wedding Singer.” Other prominent credits include “Gypsy” (June), “Cabaret” (Lulu), “1940s Radio Hour” (Connie) and “Pinkalicious” (Pinkalicious).

“I am in the Ensemble of ‘Shrek the Musical,’” Peak says. “In this show, we all have a couple of feature roles. Mine are Ugly Duckling and the Teen Fiona.”

Peak also participates in many singing and dancing scenes throughout the play, including a tap-dancing role.

“We are thrilled to send ‘Shrek the Musical’ to theatres across the country, and for American families to experience their favorite ogre and fairy tale creatures live on stage,” President of DreamWorks Theatricals Bill Damaschke says through an official press release.

The tour of Shrek The Musical will end in Los Angeles.

“L.A. is our last city for this tour, and it is just going to be a perfect way to close it,” Peak says.