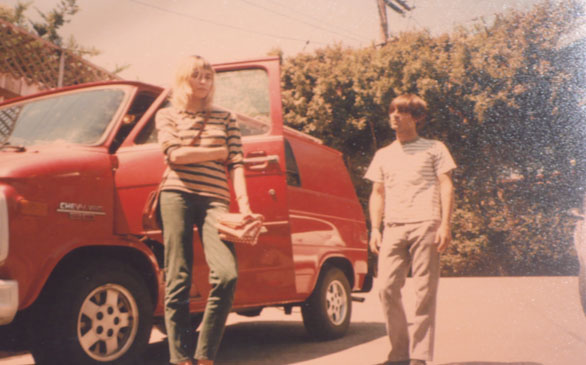 With an album title like Eternally Teenage and tracks called “Casual Hopelessness,” “Shades of Grey” and “Optomistic Vibes,” Tomorrows Tulips’ sound can be described as raw and hazy, moody and romantic. The band has been featured on the likes of Nylon magazine and the RVCA blog, perhaps because their ethereal dream-pop music will surely appeal to the young and cheerfully reckless, perfect for those summer days when you just really want to take it easy.

Behind Tomorrows Tulips is the boyfriend-girlfriend duo of Alex Knost and Christina Keys. At age 17 Knost, who is also a pro surfer, fronted the group the Japanese Motors which was eventually signed to Vice Records. With the band, he went on a world tour with the likes of Modest Mouse and the Growlers. After the Japanese Motors disbanded, Knost went on to write some songs and started a musical venture with Keyes, resulting in their 14-track debut, Eternally Teeneage.

The album is reminiscent of Los Angeles-based garage group Allah Las and a less let’s-hold-hands-and-drink-strawberry-milkshakes-while-picking-some-flowers version of the more popular Best Coast. It’s the kind of music you would hear at an Urban Outfitters store or a small and hip coffee shop. The title track “Eternally Teenage” is catchy and worthy of a therapeutic sing-along session. The last track, titled “Tired,” is something you would want to listen to on the drive home after a day at the beach. The lack of lyrics and the rough and unrefined instrumentals may not be for everyone, but it definitely sets a mood of a post-glow of an exhaustive but fun time. Overall, Tomorrows Tulips’ debut is successful and will no doubt find an audience in today’s indie-obsessed youth.

Eternally Teenage will be available July 19.