Another Earth: The Little Movie That Could 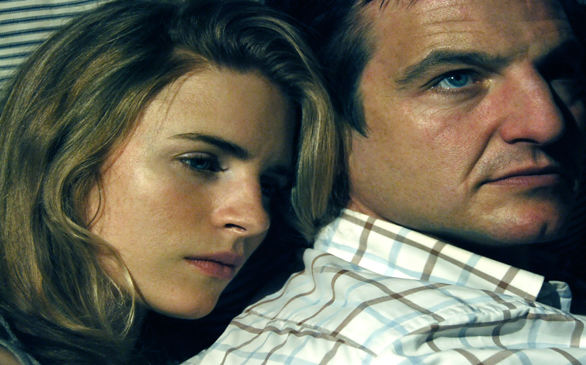 Although a low-budget, space fantasy movie may seem like a paradox in this summer’s CGI extravaganza lineup, director Mike Cahill and his co-writer and lead actress Brit Marling take on the highly ambitious film Another Earth. With a concept so intriguing and an execution that inspired a standing ovation at the Sundance Film Festival, Another Earth is the kind of movie that grabs you from the start and absorbs you until the very chilling end, leaving you in awe long after the credits stop rolling.

It is that good.

The film opens on the eve of the discovery of another earth, a parallel world where everyone has another version of him/herself. Rhoda (Marling) is a 17-year-old student whose promising future includes her acceptance as an astrophysics student at MIT. Inebriated and distracted by the sight of an Earth replica in the sky, she causes a life-changing accident that kills the family of John Burroughs (William Mapother). After four years in prison, Rhoda goes to John’s house to apologize, where she gets nervous and lies about working for a cleaning service, all while the world grapples with the possibility of meeting themselves in a parallel universe.

Known for his role as Ethan Rom on “Lost,” Mapother emanates an affable charisma that his character John understandably lacks.

“A script arrived in the office that said, ‘We have shots and footage of this movie, but we can’t find the right actor to play this role. The director has never made a feature, the lead actress is not in the Screen Actors Guild, she doesn’t have a lot of experience and there is almost no money. Do you think William would be interested?’” the actor laughs as he recalls getting involved in the project. “I read the script and thought that I’ve never read a story like this … And then I met with Mike and Brit, and they were wonderful!”

Sheepish and beautiful, Marling is a Georgetown University valedictorian who can charm anyone with her sweet demeanor and intelligence. When asked how the film would have been different if it had a bigger budget, she smiles and answers coyly, “I think if we had more money ... we would have consistently had a costume designer, or like, I wouldn’t have been doing William’s make-up! Our associate producer Phaedon [Papadopoulos] is so multi-talented, he made some of the music that’s in the film. He also would cook these meals for everybody and the whole crew were like 12 people living in a farmhouse. We’d eat in the morning all together and then we’d leave all the dishes, and I, as Rhoda, would spend the day cleaning them up … I think that [having a low budget] makes you more creative.”

Forced to resort to guerilla filmmaking in Another Earth, she recalls offering a police officer, who always wanted to be an actor, with a small part in the movie in exchange for no jail time for shooting without a permit. What would Marling do, if she weren’t bribing cops to make movies, in a parallel universe?

“If I wasn’t doing this, I think another version of myself could easily be an environmental activist. Who’s that guy who gets on a whaling ship and becomes a pirate of sort? Paul [Watson] … He’s like a real crusader of the environment. He’s like, ‘nobody’s doing anything about this so I’m going to do something about it.’ I love that!”

Another Earth treads on possibilities, but more importantly, it also explores self-reflection.

Cahill, in his young, wide-eyed enthusiasm, explains, “We were meditating on the idea of meeting yourself. If you could externalize that internal monologue we all have when you wake up in the morning and you look at the mirror and you’re brushing your teeth and you’re like, ‘OK, why did you that yesterday?’”

Inspired by European cinema and even Pixar’s Ratatouille (in one pivotal scene where Rhoda sees herself in the mirror while she decides to enter John’s house pretending to be a cleaning lady), Cahill’s direction was poetic, even sublime especially for his first feature film. This summer, you can feast your eyes with all the CGI spectacle you want, but if you were going to see one great film this year, look no further than this little movie that could.