Friends with Benefits: Mila Kunis gets naked with Justin Timberlake. 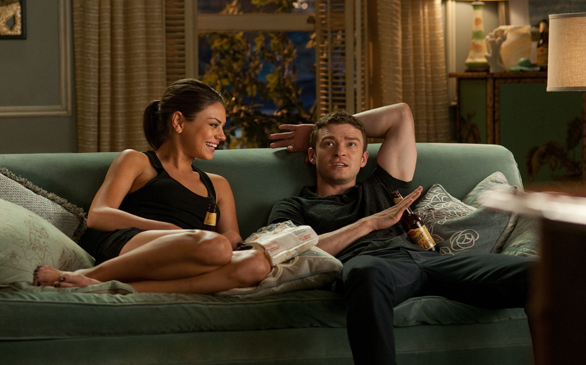 “I like to run around naked on the streets ALL the time,” Mila Kunis offers a devilish smile as she kids with me from across the table.

It’s a sarcastic response to the age-old question many an actor has been asked whenever a script calls for a steamy love scene and a few shots of bare skin: What is it like filming? Is it scary or uncomfortable?

For Kunis, who stars in Friends with Benefits, stripping down and getting all up-close and personal with a fellow co-star is always an awkward part of the acting experience.

“I’m pretty self-conscious in general,” she tells me while we chat in our suite-with-a-view at Santa Monica’s Casa Del Mar. “It doesn’t help that I’m a female [either], but I’m not the most comfortable.”

“As a juxtaposition to that, I’m extremely comfortable with Mila’s body,” adds musician-turned-actor Justin Timberlake, who stars opposite the Black Swan beauty.

In FWB, the two real-life friends play, for lack of a more fun term, fuck buddies in director Will Gluck’s follow-up to last year’s surprise hit Easy A. He’s Dylan, a successful art director from Los Angeles. She’s Jamie, a prominent job recruiter in Manhattan. Both have just gotten out of toxic relationships (Emma Stone and Andy Samberg play their respective exes in the cleverly edited opening sequence.). And it just so happens that Jamie, by convenient, crafted-by-Hollywood circumstances, helps Dylan land a swanky gig at GQ in the Big Apple.

The movie wants and attempts to break a lot of ground by skewering romantic-comedy clichés and speaking to a generation that has grown very accustomed to a culture of instant gratification, one-night-stands “Sex and the City”-isms and Grindr (Google it if you still don’t know what that is).

Surprisingly, neither of the film’s stars had any instances in which their friends shared their own personal hookup tales to help them settle into the roles.

“I was interviewed by a reporter when I was doing press for Black Swan,” Kunis remembers, “and she told me that her husband started off as a friends-with-benefits, so it wasn’t up until then that I actually started paying attention to the idea, and then it kind of started trickling around. But I feel like this concept has been around forever. It’s just that people are more willing to talk about it. It’s not as taboo. I think that our generation is a little more forthcoming, a little more honest, and I think females are embracing their sexuality more so now than 30, 40, 50 years ago.”

Timberlake disagrees, eloquently cutting in: “I think men have always been uncomfortably external about their sexuality, but it’s usually to hide something weird—”

Kunis laughs and nods, telling him he has a point.

The two actors click as if they had shared the big screen before, but they attribute their friendship to the awesome experience they had on set – and the witty script.

“We had the same sense of humor … the chemistry had a lot to do with the writing … we also had a lot of things in common,” Kunis explains.

What the pair didn’t have in common was their favorite rom-coms growing up.

“Other than When Harry Met Sally, mine is Pretty Woman,” Kunis gushes. “I could put that movie on mute and tell you word for word each piece of dialogue.”

Timberlake considers himself more of dramedy fan: “I got in trouble for saying Terms of Endearment, and she [Kunis] was like, ‘That’s not a romantic comedy,’ but it made me laugh, so I thought it was funny.”

Also featured in FWB are memorable performances from Woody Harrelson, as Dylan’s fratboyish gay coworker, Patricia Clarkson (Kunis: “I am completely and utterly in awe of her … she’s amazing.”), Jenna Elfman and Richard Jenkins.

But back to those love scenes, inquiring minds want to know how Timberlake compared to Kunis’ provocative moment with Natalie Portman in Black Swan.

“The only thing I can say is one was funny, one was scary,” she elusively hints.

Was Timberlake the scary one?

“I was more intrusive,” he slyly pipes in. “You do the math.”

Interviews
Lily James and Sebastian Stan find a real relationship at the heart of 'Pam & Tommy'
169 views
Interviews
Ricky Gervais knew people would be mad about his new Netflix special. He did it anyway
783 views

Interviews
The star of Oscar-nominated 'Flee' gives his first interview: 'I wanted my story to be seen'
1,156 views

Interviews
'Crazy Rich Asians' made Henry Golding a star. Now he's showing Hollywood everything he can do
849 views