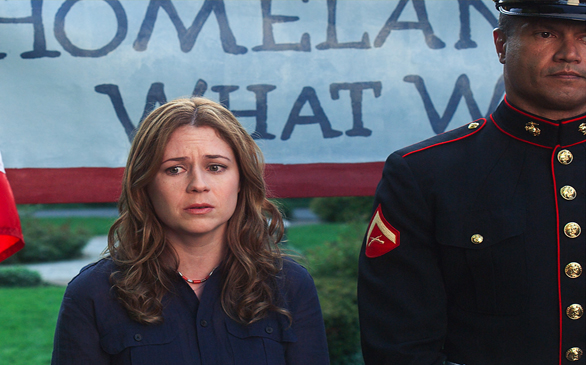 Jenna Fischer as Laura Pehlke in A Little Help.

Jenna Fischer takes a break from her role as Pam on NBC’s hit comedy “The Office,” to hit the big screen in A Little Help. Set in Long Island in the post-9/11 summer of 2002, life for Laura Pehlke (Fischer), a dental hygienist, has always been a breeze thanks to her good looks and carefree charm. Yet lately, things have taken a turn to chaotic and miserable.

Laura’s marriage to Bob (Chris O’Donnell) has become strained and loveless, and she grows to suspect he’s cheating. Her relationship with her 12-year-old son Dennis (Daniel Yelsky) is no easy sailing either, as he has turned hostile and spiteful. Laura slips back into old habits, drinking just one more beer than she should and not stopping there.

The film aims to tell the story of an ordinary individual, consumed by ordinary events that lead to an emotional and exciting journey. As much as Laura’s warm yet tragic character draws us into her venture, her lack of self-motivation to retake control of her own life risks losing the audience’s connection to her. Reasonable, considering it’s clear her life didn’t turn out the way she planned. Whose does anyway?

Most of the film revolves around Laura’s frustration to get her life back to normal and figuring out how to give love and support to her son. Yet, too many times she fails at these attempts because she loses patience or she runs away from any sort of confrontation.

Multiple times in the story, a character reveals a sad truth about their life, which provides an intense emotional context to the film. A lot of adults in the film are uneasy because they have reevaluated their lives and found themselves stuck searching for an escape. A truly heartfelt film, without all the mushiness, it remains real, not seeking to take Laura to a happier place, just a better one.