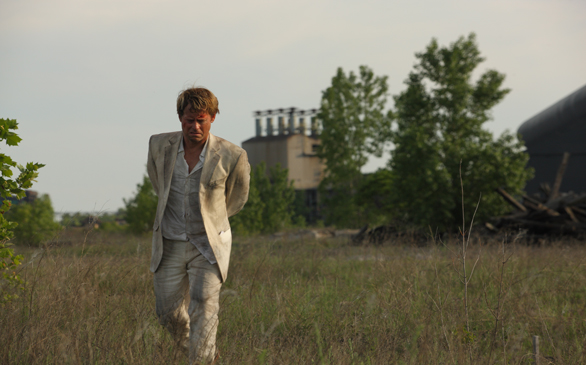 For most people, religion is a touchy, private subject that should never be discussed at dinner parties, special events or … ever, really. Like all arenas of subservience, and by that I mean the submission of a person to the practice of something (whether it be soccer or collecting Beanie Babies), religion is no exception. In fact, religion is often the most poignant example of how fanaticism and extremity can infiltrate even the most sacred of traditions.

But isn’t that also the job of a satire, to exaggerate in order to make a point? In Salvation Boulevard, both religion and satire are over indulged and are overkill. The film’s characters are based on those “Jesus people” found across small-town America, and they are led by the charming, but calculating Pastor Dan Day (Pierce Brosnan). A businessman in Christian robes, the pastor is eagerly awaiting the construction of a city dedicated to God’s worship, but under his control.

Carl (Greg Kinnear) who was once a pot smoker and follower of the Grateful Dead has now been shown the light by his wife Gwen (Jennifer Connelly) who praises Pastor Dan as much as she does Jesus. Everything is fine and dandy in Dan’s world, until he and Carl join an atheist professor (Ed Harris) for a nightcap following their debate of, what else, evolution versus creationism. When the pastor accidentally shoots his adversary in the head and makes it look like an attempted suicide, the satire stretches its wings and takes full flight.

Carl is the only witness, and he soon finds himself on the run from the pastor who has sent his crony (Jim Gaffigan) to “take care” of him. Carl must struggle with Pastor Dan’s hypocrisy, the Mexican-Christian mob who take him hostage and a new love interest and fellow Grateful Dead fan, Honey (Marisa Tomei).

Trying to follow in the large footsteps of Saved (2004), which was a provocative satire that avoided being wholly condescending in its depiction of the same subject, Salvation Boulevard has its laughs, but falls far short of expectation. Brosnan with his star persona is a perfect fit for the over-the-top character of Pastor Dan, and Kinnear is likeable as the down-and-out character he tends to play often. It is Connelly who has her moments of genuineness, but who ultimately falls too far into the satire, causing her to become overly fanatical and unbelievable to the point of offense.

Overall, this film has its moments of comedy and revelation, but they are unfortunately too far and in between to add up to be taken seriously.