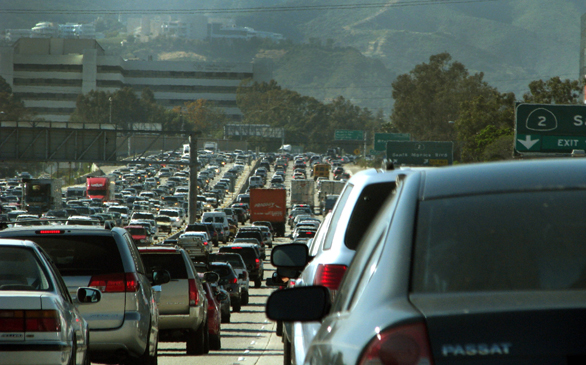 I stood outside the Whole Foods store in Sherman Oaks, surrounded by bins of honeydew melons and blueberries, and a number of fit Angelenos. Looming above us just across Sepulveda Boulevard was the enormous concrete wall of the 405.

The impending 53-hour closure of the 405 was described by assorted officials in the grave, hyperbolic tones usually reserved for floods and fires threatening homes. It’s already earned itself an equally grim name: Carmageddon. For a little more than two days, from July 15 to 18, miles of the freeway will be closed for construction – specifically, that stretch that links the San Fernando Valley to the coastal plain and cooler air of the Westside.

“Stay the heck out of here,” Los Angeles County Supervisor Zev Yaroslavsky advises at a news conference at the Skirball Cultural Center, which sits astride ground zero for Carmageddon – the narrow corridor of the Sepulveda Pass.

“It will be an absolute nightmare,” warns Mayor Antonio Villaraigosa.

The Sherman Oaks shoppers I met at Whole Foods did not seem especially freaked out. Like most of us, they’re used to rolling with the traffic punches. As for freeway traumas, what’s one horrific weekend next to the endless suffering of depending on the 405 day in and day out?

“It’ll be just another ripple in the L.A. landscape,” says Mike Parks, a lawyer who commutes to Sherman Oaks from Palos Verdes Estates every day and described himself as a “road warrior.”

His relationship with the 405, he tells me, is complicated.

“It’s either a beautiful freeway, or it’s miserable,” Parks says. “It just depends on what your perspective is: If you’re driving north or south, if you’re stuck in traffic, or sailing through.”

Yes, the 405 can be beautiful – on those most rare and delicious moments when it’s empty.

“When it’s finished, driving the Valley and West Los Angeles will be a breeze,” the Times wrote in 1961, as construction crews rushed to complete the freeway. “Eight lanes of virtually straight, minimum-grade roadway will allow motorist to skim over the hills....”

Back in the day, construction crews moved 14 million cubic yards of dirt to push the 405 through the Sepulveda Pass. They moved Mulholland Drive too, diverting it across a new bridge that passes 90 feet over the freeway. Now, a half century later, that bridge will be torn down to make way for a new carpool lane and other improvements.

“It’s absolutely critical for them to publicize this as strongly as possible,” says Isaac Lowenkron, a sports radio host I met at the market. “There’s going to be a lot of people who don’t know. You can’t predict what’s going to happen.”

But people here are already used to making 405 adjustments to their lives. If at all possible, for example, they avoid the route at certain hours. Some, like Tami Tirgrath, even move to give themselves a more advantageous starting point. Tirgrath relocated from North Hills to Sherman Oaks to make it easier to get to the Westside each day.

When the unpredictable happens on the 405, it can be very, very bad, Tirgrath says. Once, it took her 2 1/2 hours to cross over the mountains.

“I just about shot myself,” she says.

I don’t think gridlock on any other freeway is quite as damaging to the psyche. Something about the hugeness of the 405 and its unique geographic location makes being stuck there especially hard on the soul.

“There’s really no recourse,” says Ivor Francis, a musician and music teacher. “You’re in a canyon. There’s one real option, and that’s Sepulveda. You have this human psychological reaction to feeling trapped.”

“One small accident can trigger a backup for miles,” adds Michael Corral, a photographer. “It can really be bad if you have small children in the car with you.”

Of course, the idea that this already dysfunctional system could devolve, however briefly, into further anarchy has some people nervous.

“It’s going to be an interesting sociological experiment,” Corral says.

Like people trapped inside a mad scientist’s maze, he and Francis, his friend, have already plotted their possible escapes.

“The alternative routes will all be congested,” Corral says. “All the canyons: Beverly Glen, Benedict, Coldwater, Laurel.”

“Trying to get out through the Cahuenga Pass and the 101, that’ll be bad too,” Francis adds.

“They should close all the freeways periodically to remind people of what it’s like,” says Friedson, who was born and raised in North Hollywood just as the freeway boom was beginning. “I used to play on the freeways before they were opened,” he says. “The 170, the Hollywood Freeway – I used to ride my bicycle on that.”

These days Friedson is a car mechanic. He works on vehicles some of his customers love to drive to their limits. In the brief closure of the 405, he sees a chance for the city to take a collective breath.

“Slow your lifestyle down a bit, do something else,” he sys. “People are so hung up they have to get somewhere.”

No doubt many residents of the Valley and the Westside will take that advice to heart next month. Many will stock up on food and stay home. In some neighborhoods, I predict, car exhaust will give way to the gentle waft of smoke from backyard grills. For two full days, in the great road’s hinterlands, life will assume the slower rhythms of the pre-freeway past. Until 5 a.m. on Monday, July 18.