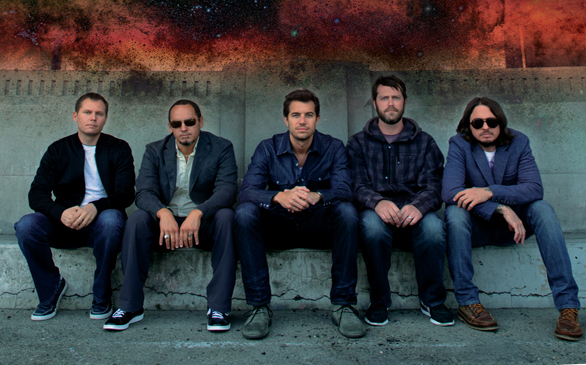 “Compromising, listening, good communication and valuing the input of the other members is really important,” says 311’s Nick Hexum, referring to the magic behind the band’s longstanding relationship. “Ego will often make it so certain people feel like they don’t need to listen anymore. Our band has successfully avoided that; we’re very blessed.”

Dr. Phil has no words of wisdom to impart on keeping a band marriage together for 311, solid for 21 years and counting. Making music with its five original members and happily intact, this brotherhood has stood the test of time. A rarity in the fickle and trend-driven music industry, the band continues to live by its own lyrical themes of unity, staying positive and loving life.

Known for rock-reggae-rap hits such as “All Mixed Up,” “Amber” and “Beautiful Disaster,” fans from across the globe flock to witness that special feeling absorbed at a 311 live show, the same feeling the band admits they receive from their fans. “Sunset in July,” the first single from their new album, Universal Pulse, reflects on this energizing interaction.

“There’s a pivotal line in the chorus, ‘Watching you dancing and having the time of your life, and it’s getting me high,’” says Hexum, about the band’s experience onstage and the feeling they receive from their audience during a live show. “Seeing people with a huge smile on their face, moving their heads back and forth like they’re in another dimension, I really get a charge out of that. We realize the power of music over people; it’s like a drug.”

The band will release Universal Pulse on its own record imprint, 311 Records. After decades of touring and putting on special events such as 311 Day, a show containing their entire setlist of over 60 songs and five hours of music, the band has built a huge grassroots following which has allowed them the freedom to go with their own independent label and call their own shots.

Hexum explains their decision behind moving away from a major label: “If you’re a brand new band and you’re breaking, then a major label brings a lot to the table. For us, we already have a direct relationship with our fans. We wanted to have more of a slow burn of touring and doing promotion, stretching it out and letting the word of mouth do the promotion for us.”

This year’s Unity Tour will find 311 with old friends Sublime with Rome, coming to the L.A. area Aug. 20. The band will also headline the first Pow Wow Festival on Florida’s Suwannee River, a three-day communal celebration taking place Aug. 4-6. The band will perform four sets along with the album Transistor in its entirety, sharing the stage with other heavy live-show hitters such as Deftones, Reel  Big Fish, Ozomatli, G Love & Special Sauce, Mix Master Mike and the Dirty Heads.

“The festival that will be nothing but a good time,” says bassist P-Nut with a grin. “We’re still trying to bring in a couple more bands to add to the list to make it even more impressive. It will be like a mini summer camp.”

Hexum agrees, “We knew it would be a good fit for our fans because it’s kind of like going to a Dead show. It’s not just the music, it’s the whole environment; the tailgating, the whole cultural experience of going to a 311 show. It just seemed like a perfect fit.”

After livin’ and rockin’ for the past two decades, the band’s mighty roots have survived the ever-changing musical landscape, continuing to live the words that end each and every show: “Stay positive and love your life” – not a bad gig that began with five friends who grew from teenagers to grown men, having sustained a unique and flowing musical synergy.

“We feel like we’ve stumbled on a great chemistry, a special group, that only the five of us could offer, and we value it,” says Hexum. “‘Unity’ is the coolest word in the world and to have it be associated with our band sort of like a brand, it’s a really cool thing.”