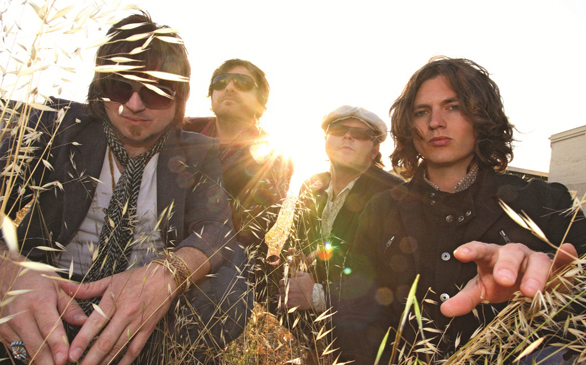 California-based blues-rockers Rival Sons are preparing for the release of their new album, Pressure & Time, slated to drop on July 26. And since they’re on tour in Europe leading up to release day, the guys have been thinking about what to tell European journalists when they’re asked about the current rock scene in Los Angeles. Singer Jay Buchanan isn’t at a loss for words on the subject.

“Los Angeles is as hungry as it’s ever been,” says Buchanan. “Because it’s an undeniable hub for the industry, the city is rife with veterans, makers, fakers and rookies alike but you can usually find one or two bands serving it hot. This is the way L.A. was when I found it, and it’ll be the same when I leave. The town is our nation’s brothel of young musicians.”

Look for a homecoming record release show to be announced late this month at RivalSons.com.

This summer the party’s at Brandon James’ house! Well, not really, but it should be. The emerging L.A.-based singer-songwriter would invite everyone over to hear his new Down in the Sand EP of West Coast country music if he could.

And while the new music is satisfying your soul James would likely be tempting your taste buds with several of his own culinary creations like Honey Garlic Sun Chip Chicken, Korean Sesame Beef & Veggies or Baked Tilapia Filet with Kalamata Olive & Basil Relish. For now though you’ll have to prepare these delicacies yourself by following the recipes James has posted at CountryRockRecipes.com.

Down in the Sand is available at BrandonJamesMusic.com, and after you’re through eating and listening you can spend a little time rooting for James; he’s been nominated for two L.A. Music Awards, due to be handed out this November.

It’s going to be sometime late in the year before former Shwayze member DJ Skeet Skeet releases his debut album, but he’s got plenty going on right now. Skeet has joined the California Dreams tour where he’ll DJ for 45-minutes before headliner Katy Perry comes on.

“I’ll be playing a variety of remixes and originals I’ve worked on as well as crowd favorites and songs I’ve loved over the year,” says Skeet.

One of the originals, a single dropping on July 26, is a party anthem featuring raps and vocals by Donnis and Nadio Oh called “I Like it Loud.” The California Dreams tour has a three-night layover at the Nokia Theatre Aug. 5-7 and an Anaheim stop Aug. 10 at the Honda Center. Keep up with DJ Skeet Skeet by visiting EatSkeet.com where you’ll also be treated to some of Skeet’s favorite dumb jokes.

Billed as “Southern California’s Rock Festival,” the Epicenter Festival has announced Limp Bizkit as the headline act for the 12-hour blowout coming Sept. 24 to the Verizon Wireless Amphitheater in Irvine. The show will be the first Bizkit SoCal show in over a decade, and frontman Fred Durst is obviously excited about the appearance.

“I promise this will be a party you do not want to miss,” raves Durst. “Epicenter will be our first and only Southern California shindig, and fellas, don’t be mad that Epicenter will be filled with women … that’s how we roll!”

You might not yet have heard of upstart Indiana label Crossroads of America, but this summer you’ll have a chance to hear what the indie imprint has been working on. Rodeo Ruby Love and their new album, This is Why We Don’t Have Nice Things, have been getting a lot of attention, including from their big fans in Reel Big Fish. The ska-kings scooped up Rodeo as the opening act for their six-week North American tour that also features Streetlight Manifesto and stops at Club Nokia July 14. rodeorubylove.com