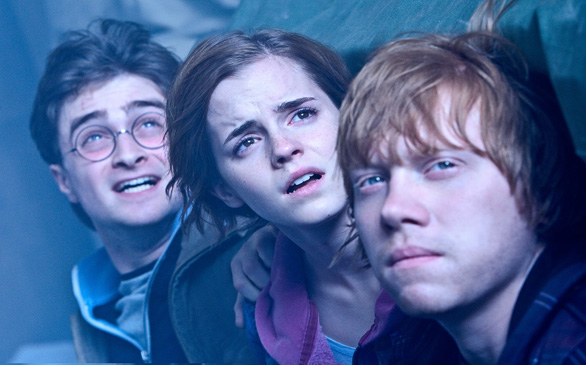 Sigh, the end is near.
(Credit: Jaap Buitendijk)

If you don’t want to read some sappy article about a full-grown adult’s obsession with a wand-wielding, broomstick-riding teenage wizard with a disfigured forehead, then turn the page my friend.

It’s been a little more than a decade since I first opened a hand-me-down copy of Harry Potter and the Philosopher’s Stone (the British version of its American Sorcerer’s Stone counterpart given to my slightly more favored cousin by my grandparents from London). Since then, I’ve hysterically cried in the middle of the night while reading the part of a certain headmaster’s death. I’ve attended midnight book release “parties” (by that I mean a children’s costume and activities get-together at a chain bookstore). I’ve watched all the movies at midnight showings. All my book reports in middle school were about one book or another from the series. If I ever get ink permanently seared on my skin, it would most likely be a shape of a lightning bolt (don’t judge, it’s not like I would get it on my forehead).

July 15, the release date of Harry Potter and the Deathly Hollows: Part II will surely be followed by a week of personal denial and intermittent sighs. It really is the end of an overstaying childhood. No more midnight release party of any kind. Daniel Radcliffe has already exposed his bits on Broadway, and Emma Watson has already chopped her hair off.

It’s hard to miss all the Harry Potter hoopla even if you’ve never read the books. From J.K. Rowling’s revelation of Dumbledore’s sexual inclination making late-night television jokes to a real Quidditch Cup (How, just how?), you would have had to live in a cave to not realize its cultural impact. So in honor of the beloved, bespectacled wizard and childhoods everywhere, here are a few events in Los Angeles to celebrate the end of it all:

The Harry Potter Tribute Art Exhibition is a collection from over 50 artists of nearly 100 paintings, sculptures and installations that are themed on you guessed it, everything Harry Potter. For two bucks, you get a complimentary alcoholic or non-alcoholic Butterbeer, exclusive buttons, a chance to join trivia and costume contests and a Snitch seeking competition. If you weren’t already sold by the mention of alcoholic Butterbeer, there will also be a mystery flavored Jelly Bellies tasting section, a Hogwarts themed photo booth and hourly raffle prizes and giveaways. And if you really don’t want to spare the $2, come in a costume or Facebook, tweet or blog about the event and get in for free.

Somehow, I have only been recently aware of this store on Wilshire. Whimsic Alley was designed to resemble Diagon Alley with its little shops within a shop that contain anything you could ever want from Hogwarts robes, sweaters and jewelry to posters, toys and other paraphernalia. They will be having a release party of the movie that involves a party bus and a festive pre-party dinner. If you don’t get a chance to snatch some tickets before they sell out, they also run other events through out the rest of the year, such as a young wizards day camp, a celebration of Harry’s birthday, a murder mystery dinner, a Yule Ball and an All Hallows Eve Costume Ball.

If one day isn’t enough, why not celebrate for a whole week? If you are in the Inland Empire, Harkins Theatre in Chino Hills is holding a Harry Potter extravaganza by showing all the films in the series throughout the week leading to Deathly Hallows: Part II.

AMC at the Block in West Orange and Burbank will be presenting a weeklong Harry Potter movie marathon. Saying goodbye is hard, so savor the experience by seeing two films each night, Monday through Wednesday at 6 p.m. On Thursday, July 14, watch Part 1 of Harry Potter and the Deathly Hallows at 9 p.m. just right before Part 2 at midnight.