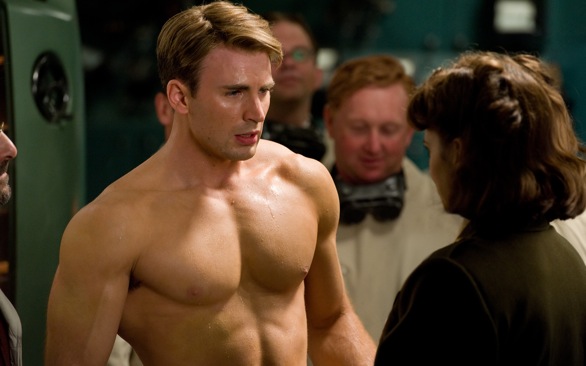 Chris Evans as Steve Rogers and Hayley Atwell as Peggy in Captain America: The First Avenger
(Credit: Jay Maidment/Marvel Studios)
The running through flying bullets and the jumping over seas of fire are just a few duties of a Marvel superhero. But Captain America, who first appeared in March of 1942, eight months prior to the U.S. entry into World War II, doesn’t have a green lantern or the DNA of a demigod. In fact, “Cap” is the alter ego of Steve Rogers, a sickly-looking, 90-some pound patriot who worries less about the ladies and more about weaseling his way into the army, despite his grocery list of ailments.

The duality of Steve Rogers/Captain America’s physique was one obstacle that filmmakers confronted in bringing the hero to the big screen in Captain America: The First Avenger. How could they get one actor to play both? Enter Chris Evans, who took the challenge. He says he may hit the gym more, but he can certainly relate to his meager-framed character.

“You have got to see pictures of me from birth to 18,” says Evans. “It’s a sight. It was a bumpy road for me growing up. I was a very skinny guy. I went to acting camp, to give you a little idea of where I’m coming from.”

Director Joe Johnston and his crew of special effects experts finally decided on a way to make Evans a believable Steve Rogers by changing the footage in postproduction and sizing down Evans’ six-foot physique. For some scenes, they also hired a body double, Leander Deeny.

“I would do the scene with Chris, then I’d do the scene with Leander,” explains Hayley Atwell, who stars as the film’s badass female lead, Peggy. “Leander would watch the monitor for every facial expression and body movement, even in terms of where Chris breathed so that every time he spoke you could see ‘skinny Steve’s’ chest go in and out. He was incredibly meticulous about getting it right.”

However, Steve Rogers isn’t small forever. He is chosen by a German scientist (Stanley Tucci) as the perfect specimen to test a formula that makes the good guys even better, and the bad guys a whole hell of a lot worse. Despite the qualms held by Colonel Chester (Tommy Lee Jones) and tech genius Howard Stark (Dominic Cooper), Rogers is given a Frankenstein-like physical alteration.

“I hadn’t seen [Chris Evans] with his top off until that moment,” says Atwell about filming the transformation scene and touching her costar with his shirt off. “I was just like, ‘Go for the man boob.’ Joe loved it, and we ended up doing many takes just to see how far we could go. So it then got a little over the top. There was the touching of the nipple, and it became like a ‘Saturday Night Live’ sketch.”

All joking aside, Captain America is up against a mighty foe. Johann Schmidt (Hugo Weaving) is the mastermind behind Hitler’s growing reign over the world. He’s the head of HYDRA, an organization making game-changing machinery that will surely destroy the Allies and ensure domination. His alter ego, the Red Skull, is the horrible result of the same serum that created Captain America.

While Schmidt is conspiring, Cap is initially thrown onto the stage to appease audiences and garner more support for the war amongst American citizens. But he soon grows restless and proves himself worthy of fighting when he single-handedly rescues hundreds of soldiers, including his best friend Bucky (Sebastian Stan), from one of HYDRA’s headquarters.

To quote from another great superhero series, “with great power, comes great responsibility.” Chris Evans was very hesitant to take on the role of a nationally adored figure. He first turned down the part because, get this, he was scared it would make him more famous.

“I wasn’t 100-percent positive that my endgame was to be a huge movie star,” says Evans. “I was not doing the movie because it terrified me … But let’s be real. I make movies. I put on a shield, and I get paid a lot of money to run around and play make-believe. I’m not in the coalmines. I’m not flipping burgers. Life is great. Every day you have to maintain a healthy amount of perspective.”


Captain America: The First Avenger releases in theaters July 22.
Article posted on 7/20/2011
This article has been viewed 4249 times.