Devil in a Blue Jersey 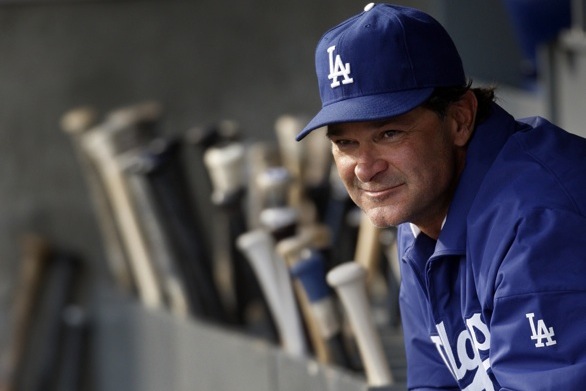 “There is only one way to play this game, and that is the right way,” says Dodger manager Don Mattingly. It is his mantra. From the day he first addressed the press as skipper to just last weekend, the words are always the same. When asked to elaborate, Mattingly talks about being consistent with preparing oneself to do one’s best day in and day out. Granted, with a team that is struggling to get out of last place, he is not quite ready to write a book on the philosophy, but there is something to be said for the stability, integrity and dignity the young manager has maintained in what might be the weirdest and most tumultuous season in the famously storied franchise history. While mayhem proceeds off the field Mattingly has managed to keep his club focused every day on the game of baseball.

Last week offered a fresh crop of off-the-field headlines. Two suspects, Louie Sanchez and Marvin Norwood were apprehended in the brutal opening day beating of Giants fan Bryan Stow while owner Frank McCourt was forced to accept a loan from MLB, a situation which his own lawyers described as “…akin to making a deal with the devil.”

Whether or not the comment was made as merely a “literary allusion” as the McCourt team has insisted, it is hard to let an evocation of Satan slip by without noting the certain stench of sulfur emanating from the whole Dodger ownership debacle. It is about time for an honest conversation about the presence of evil in the year of the Bryan Stow beating and the mass disillusionment of Dodger fans.

Of course, the beating of a fan at Dodger Stadium and the mismanagement of the organization are two different subjects, and yet somehow in the minds of concerned fans, there is a correlation. The old ballpark, once considered a safe haven for beloved memories, is tarnished and no amount of uniformed LAPD officers in the parking lot or in the stands can bring it back. In some ways their presence only adds to the feeling that this is a franchise spinning out of control and far removed from its former glory.

The stadium once called the “Taj Mahal of ballparks” has been gradually tagged up with more and more advertising so that at present, looking out from home plate, one counts no less than 40 advertising signs, and that does not include the electronic screens that encircle the park. The fan experience has increasingly become about being hustled to buy something and less about watching baseball.

The increase of consumer images has been steady since Rupert Murdoch and his right-wing News Corp, otherwise known as Fox, purchased the team 13 years ago. The same Murdoch who has been scandalized recently when it was revealed a newspaper of his was making bribes to police officers and hacking phone lines. Murdoch’s company has never gone away; they are the ones who loaned Frank McCourt the money to buy the team and now propose to bail him out with further loans in exchange for television rights.

Evil may be defined as deliberate cruelty, such as the senseless beating of a fan by Norwood and Sanchez on opening day, or it can appear in a far more banal way as everyday greed and self-interest. Evil prevails when members of society no longer recognize the common bonds of humanity but see individuals as commodities and consumers with dollar values attached. As the stadium experience has been altered and the team has performed poorly, news of Frank McCourt's irresponsible handling of the organization has created a sense of disillusionment among fans.

And yet despite the malicious greed of corporate leaders and violent behavior of thugs off the field, despite the sub .500 record and weak hitting, somehow this is still a very interesting team to watch. They are still a team endowed with heart, which is no small feat considering how disheartening the ownership situation. Manager Don Mattingly deserves much credit for keeping his players focused on playing their best baseball. Through it all he has preached the importance of consistently preparing oneself to do one’s best every day. For this reason, there is still a lot of joy to be had watching the team play. What Mattingly lacks in managerial experience and a winning record, he makes up presently with integrity and dignity, qualities the Dodger organization will need if they are ever to win back Los Angeles and transcend the evil corruption that engulfs them.