Art for the Week 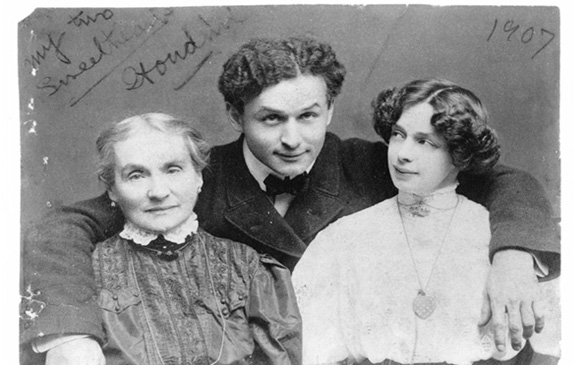 Into the Night: Music and Magic

To those of you who love being active during the night instead of in the morning, and love music and magic, I hope you did not miss the event at the Skirball Cultural Center on the evening of July 8.

The Skirball Cultural Center, a center dedicated to exploring the connections between 4000 years of Jewish heritage and the vitality of American democratic ideals, held a one-night only party to celebrate its new exhibition, Houdini: Art and Magic.

Featuring a turntable of praised local indie bands, the event also had special after-hour access to Houdini: Art and Magic and an equally popular exhibit, Masters of Illusion: Jewish Magicians of the Golden Age, as well as, a screening of the rare Harry Houdini film, Master Mystery (1920).

In the lineup of artists for the concert were Autolux, a rather otherworldly band with unique sounds and the Superhumanoids, known for their psychedelic mix and match of ’60s harmonies, new-wave and garage rock. Even better? The night had KCRW host, producer, DJ and artist Anthony Valadez to overlook the party and keep you jumping up and down, fist pumping while you waited for boring intermissions to end.

If you happened to miss the event, don’t sulk too much because the Houdini exhibit will be running until Sept. 4 and is a truly amazing experience.

Held on the last day of June and hosted by the LA Network of Human Rights Watch, was an evening of art and music filled with the right amount of awareness for the artistic community of Los Angeles. On the evening of the 30th, numerous people gathered at the Breezeway at the Barker Block in Downtown to indulge in a scene of art educating them on the lives of people in a world larger than their own.

Displaying works by Village Beat and Rachel Fleischer, as well as some live artistic creativity by Gregory Siff, the evening was guided by the sound provided by Jilly Hendrix to create a special event of photography. A truly eclectic collection of works, it seems the artists have a theme in common: to widen the perspectives of the audience and to open their eyes to the variety of lifestyles and lives they never even tried to imagine. With the ambient lighting and the cold cement wall, the venue was perfect for an evening of art that somehow gives you the weird butterflies in your stomach.

Village Beat is a group of artists and activists founded by the filmmaker and activist duo Anneliese Vandenberg and Austin Peck. Vandenberg and Peck are currently working on a documentary film called the Tough Bond, expected to release in January 2012 – a film depicting the lives of Kenyan street children addicted to glue.

Rachel Fleischer is also an artist and activist who has created a strong footprint in the world of art and activism through her art and award-winning documentary, Without a Home (a film documenting the homeless in Los Angeles). With similar agendas in mind, Village Beat and Fleischer happened to be the perfect fit for an event hosted by Human Rights Watch.

Oh, and let’s not forget Gregory Siff, because the American pop, street, abstract-expressionist featured in numerous events and venues such as the Standard Hotel was there at the event as well – with his paintbrush, that is – to create a painting with brilliant colors.