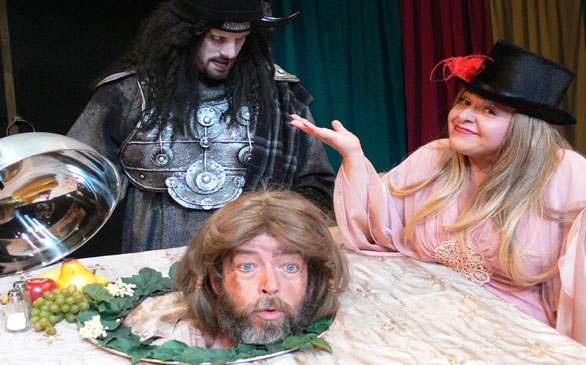 “Fleetwood Macbeth” clearly depicts the storyline behind The Tragedy of Macbeth by the great William Shakespeare, infused with the impeccable sounds of Fleetwood Mac. Thusly, this is considered a musical comedy; it is a must-see production.

Right from the beginning, the audience can experience the comedy and lively demeanor of the entire cast. Multiple actors randomly select volunteers to appear in the opening scene of the play, which raised eyebrows – but in a very good way.

What followed, became a series of marvelously comic scenes and joyful singing covers. One of the most enjoyable moments of the night arrived when all the sexy witches made their way to the stage. Thereafter, each gave their stage name, and some were simply hilarious, including the Whichever Way You Want It witch.

As we all know, Macbeth deals with a tragedy in Scotland. Although “Fleetwood Macbeth” shows that, it was in a way that makes everyone laugh from beginning to end. Macbeth battles friends, witches, the supernatural, envy, jealousy, love and betrayals, among other things.

Through some of the most creative and imaginative notions ever portrayed on the theatrical stage, “Fleetwood Macbeth” indeed delivers the unexpected and unforeseen. One of the prominent highlights of the show came when Lady Macbeth, played by Lisa Valenzuela, gave a solo cover of the classic tune “Dreams.” She has a stunning voice, and the manner in which she connected with the public through the singing and physicality were impressive.