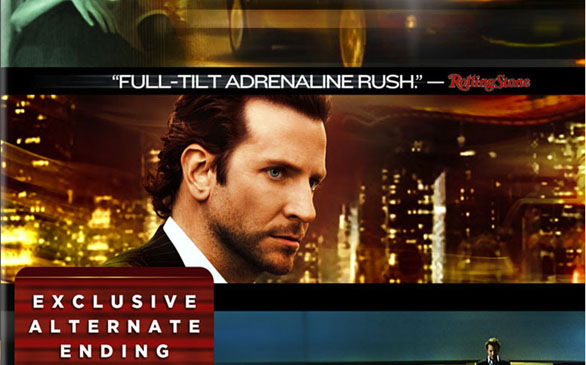 The Majors: Bradley Cooper transforms from a struggling writer to a Wall Street hotshot when he stumbles onto a miracle drug that increases his brainpower exponentially in Limitless.

Set in a dystopian future, Tekken follows one man’s quest for revenge through a deadly martial arts tournament.

Foreign Fare: Winner of the Palme d’Or at Cannes, Thailand’s Uncle Boonmee Who Can Recall His Past Lives is a beautifully shot, poetic magical realist drama with Buddhist underpinnings.

A virus spreads through Berlin turning everyone except a group of survivors into rampaging psychos in Rammbock: Berlin Undead.

Funny Business: Michael C. Hall, Sarah Silverman and Rainn Wilson star as siblings who have to deal with the publication of their younger brother’s warts-and-all portrayal of his family in his new novel in Peep World.

Dax Shepard’s directorial debut, Brother’s Justice, is a mockumentary with Shepard trying to reinvent himself as a martial-arts star.

In Take Me Home Tonight, Topher Grace stars as a disaffected college grad who flees responsibility and chases his dream girl over the course of a wild night in 1988. Anna Faris co-stars.

Hey, Boo goes behind the scenes of the making of Harper Lee’s classic To Kill a Mockingbird.

Phil Ochs: There But For Fortune profiles a neglected figure in ’60s music and master of the protest song.

Two IMAX nature documentary classics come to Blu-ray. Ring of Fire takes you inside the world’s deadliest volcanoes. Tropical Rainforests goes into the heart of the world’s most beautiful and lush locations.

Also available: The Third Wave, The Kids Grow Up

The Idiotbox: Seth Green and company continue to mine the mother lode of parody fodder that is the Star Wars saga in the final installment of their stop-motion trilogy, Robot Chicken: Star Wars III.

Glenn Close returns in her powerhouse turn as a high-profile litigator in Damages: The Complete Third Season. Lily Tomlin joins the star-studded cast.

Gear up for some nostalgia with the arrival of the beloved Saturday morning action cartoon Thundercats: The Original Series Season 1, Vol. 1. Then pop in Nickelodeon’s teens-on-a-dude-ranch fave Hey Dude – Season 1.

Each chapter of History’s epic documentary America: The Story of Us is now available individually, from “Rebels” through “Millennium.”

Join Heff’s three latest girlfriends as they live it up in the Playboy mansion in The Girls Next Door: Season Six.

From the Vault: Three sci-fi cult classics see the light of day: Roger Corman’s Battle Beyond the Stars is Seven Samurai in outer space, written by a young John Sayles, with art direction by James Cameron. Also available are the sci-fi western Oblivion and the post-apocalyptic thriller Damnation Alley.

The Horror! The Horror! The writer/director team behind the original Saw re-team for Insidious, one of the more effective horror films in recent years. The film follows a family whose son has fallen into a mysterious coma and is under attack by evil spirits.

Under the Radar: Julian Schnabel directs Miral, an affecting portrait of a Palestinian girl growing up in war-torn East Jerusalem.