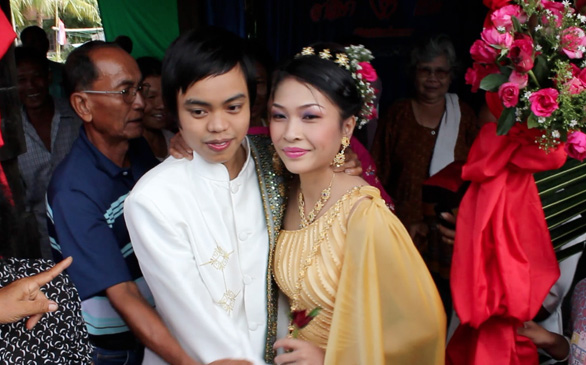 (Credit: A young man and woman at their wedding in Buri Ram, Thailand.)

Enjoying an afternoon on the rooftop of a trendy hotel, I had the opportunity to sit down with Oscar-winning director Kevin Macdonald (One Day in September, The Last King of Scotland) and acclaimed editor Joe Walker (Hunger, Tabloid), spearheads of a once-in-a-decade film project, Life in a Day. With such a large and potentially historical project, my first question was: “How is everyone doing?”

They replied, “great and relaxed.” I couldn’t help but laugh, thinking about the looming pressures of a having project on the cusp of release. How could they be so calm? I think they were so relaxed because their project lives up to its hype and definitely does its job, to “entertain, enlighten and live on in history.” This is what Macdonald wanted to accomplish with this film.

Life in a Day is the movie that truly defines the decade of the social network generation run by YouTube, Google and Facebook. This is one time when vast amounts of communication have been used for something constructive in legendary proportions.

Coming into the project Macdonald says, “YouTube wanted celebrate its fifth birthday, they wanted to create a project that could tell the stories of its subscribers. … Choosing of the date was coincidental; they wanted to choose a time after the World Cup. July 24th seemed like a good day for the world, so July 24th was the day.”

YouTube teamed up with filmmakers Ridley and Tony Scott as executive producers along with director Macdonald to give people the chance to show what the world is truly made of. Users ran with it, chronicling their every move so that you see the many things that people do on even the most quiet and ordinary of days.

Macdonald did an amazing job using beautiful and vivid imagery throughout the entire film. It portrays the significance of a teenage boy shaving for the first time and a woman skydiver tumbling through layers of the Earth’s atmosphere. It also displays life’s ironies: Multiple people are shown getting trampled to death at a love parade, a few rush over to help but most of the crowd continues to enjoy the concert; a cow’s demise at a slaughter house is shown; a father and son document their lives caring for their loved-one stricken with cancer; a joyous elderly couple finally ties the knot; a young man tells his grandmother via a phone call that he is gay with the heartfelt desire that she can come to love his significant other as much as he.

As editor of this herculean task, Walker says, “We had to owe it to grand ole luck that the videos matched what would come to mind in our heads. Our teams went through nearly 80,000 video submissions and close to 4,500 hours of footage.”

Macdonald chimes in, “The film gods smiled down on us.”

This film is a testament to how preparation in one’s craft and opportunity can create genius when it comes to art.

Macdonald explains the differences in directing a project such as this and a feature film: “With a feature you’re directing a cast and have a crew, but with this project there was no cast. So what you see as a viewer, is the video as I was seeing it, it could not be changed … Thus, creating an authenticity which is real life.”

The continuity, despite the thousands of hours of raw footage, was incredible. According to Macdonald there were many unusual and memorable videos didn’t make the final cut. One in particular was group of surgeons removing a 12-inch wrench from a man’s insides, still resonates with both the filmmakers. It was scenes like this made the film team’s job stressful but made for a fast-paced, fascinating chronicle.

“This is life. It’s extraordinary, and it can also be mundane. From no matter what perspective we examine it, it is mesmerizing,” says Macdonald. “People will take whatever they feel out of the project, but it is something in it for everyone.”

Most significantly, Life in a Day reveals how we are all the same, no matter where we are or what we do.

Life in a Day releases in select theaters July 29.