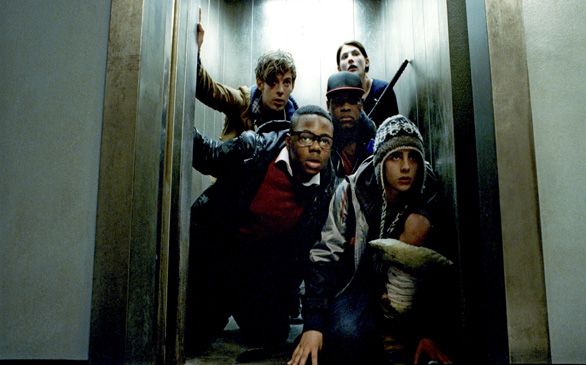 The idea of an alien invasion is nothing new. There is always the slightest fear in the back of our minds – and filmmakers’ minds – that one day aliens will crash down to earth and nothing will ever be the same.

But that paranoia is just much more fun when you mix in the right amount of humor in it. Attack the Block, directed by Joe Cornish and produced by some of the same people involved in Shaun of the Dead, somehow manages to take this decades-old idea and create a film equally thought-provoking, adrenaline-pumping and chuckle-inducing.

The film starts out with an innocent nurse named Sam (Jodie Whittaker) who is mugged by a group of crime-seeking ruffians. The scene goes from normal to strange when a meteor crashes into a car and the group of youngsters finds an alien inside. Their leader, Moses (John Boyega), gets a gnarly scratch across his face and his pride wounded so he seeks out the monster and slays it. Problem is, this gets other aliens very pissed off and they invade earth.

Laced with other subplots, including a drug-selling thug who is also out for the main character’s blood, the film throws together the victimized Sam and the hooligans and somehow gets us cheering for both of them. Cornish is clever in how he handles the situation, and the actors aid him, falling almost perfectly into their roles with no trace of the jagged edges of the first-time thespians they are.

The monsters themselves are not overly-CGI, instead existing as black, furry monsters with electrifyingly blue teeth that can shred anyone to pieces. They’re almost cute in a weird way, until Cornish catches you off guard at exactly the right time and you watch a large amount of blood splatter every which way as another character dies.

Cornish takes us on a fun ride with pithy one-liners and interesting characters but also makes us think about racial profiling, the complexity of crime, the loss of youth and, ultimately, what unites the human race. Some scenes are dangerously close to being cheesy at times, but as an audience member you’re OK with that, as long as the ride doesn’t end. A dance-friendly and adrenaline-pumping score, and the help of Nick Frost as a minor character, only make this film a guilty pleasure well worth the watch.