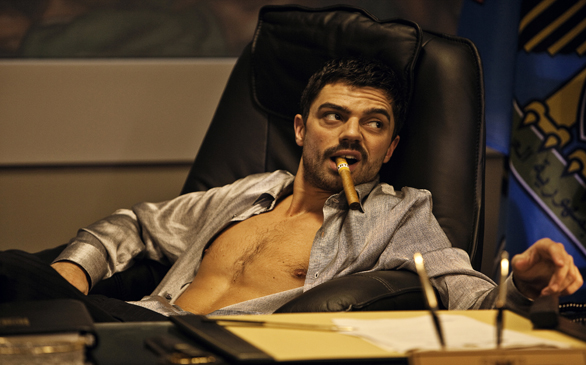 Prior to the U.S. invasion of Iraq, Saddam Hussein’s regime controlled the country with unquestionable brutality. Taking that brutality to the next level was Saddam’s son Uday, who used his position of power to exert his malevolence upon the world. Uday Hussein’s personal life of lavish pursuit, sexual brutality and tyranny is depicted in this excellent action drama.

Based on the true story of Latif Yahia, the man who was forced to become Uday’s body double, The Devil’s Double reveals an insane world of drug abuse, corruption and murder. Latif is taken from his service as a soldier in the Iraqi military and involuntarily tailored to be the third son of Saddam Hussein and Uday’s body double. Latif struggles to deal with Uday’s terrible and perverse nature as he is immersed into the world of the Iraqi royalty and ultimately takes drastic steps to flee from the evil of Uday.

Filmed in Malta, The Devil’s Double presents a glamorous party scene catering to Iraq’s elite, coupled with the dusty rural countryside we’re used to seeing in the news. It has a very frontal appearance that puts you right in the scenario.

Dominic Cooper stars in this film and shows his diversity playing both the roles of Uday and Latif. Cooper definitely plays it well. In the subtly black comical relationship between the two characters it’s easy to forget that you’re watching the same actor. It should be noted here too that the editing goes to lengths to put Cooper’s characters in the same places seamlessly. A great cast of actors supports Cooper, including Raad Rawi – who plays Uday’s conflicted agent, Munem – and Ludivine Sagnier – who portrays Uday’s mistress and Latif’s love interest, Sarrab.

The story of Uday Hussein in his prime and the ordeal that Latif Yahia lived through is truly a fascinating one. For those with any interest in how Saddam’s Iraq operated, this is a must see. In addition to this film’s accurate rendering of events and in-your-face style, its constantly gripping dramatic plot is well countered with some seriously super-violent sequences. Although I’m not sure how accurate to history the end of the film is, it presents a great emotional payoff with the delivery of some major poetic justice for the film’s antagonist. It makes for a captivating 108 minutes of middle-east sensationalism.