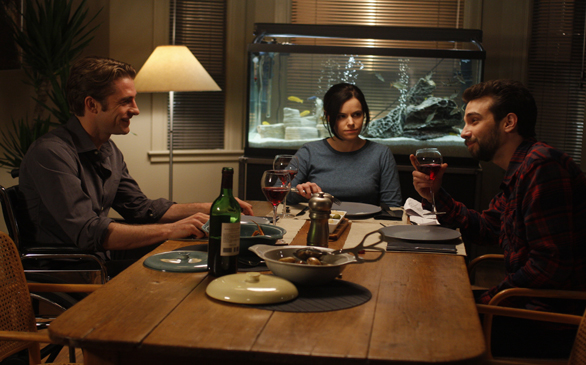 If you like movies with twist and turns that keep you guessing to the very end, get ready to take a trip to Canada and meet Spencer, Louise and Victor. Good Neighbors is a dark, twisted film that will have you second-guessing whom exactly you live next to.

Spencer (Underworld’s Scott Speedman) and Louise (Emily Hampshire) have bonded over the recent murders in their community; murders that continue to hit closer and closer to home. It seems both have become almost obsessed with the man terrorizing their community, coming together over others’ misfortunes. Soon after, a new tenant named Victor (Jay Baruchel, She’s Out of My League) moves into the building, and all three become “friends”.

Although they try their best to make it through the winter, you can’t help but feel as if something is off between the trio. As the police urgently try to find the murderer, the three neighbors soon find out they each have their own dirty little secret.

The film has a dark, artsy mood to it; audiences will love the suspense the film builds up. The movie is broken up into sections marked by months and takes you deep inside the lives of three tenants. Right when you think you have the case solved, a curve ball is thrown at you.

It’s a different type of movie, mixing romance, terror, mystery and slight comedy. It starts off a little slow, but all three actors have strong performances that allow the audience to connect with each character individually. By allowing the audience to identify with the characters, it makes the film much easier to follow. Music also plays a big part in the film as it sets up the suspense, so one can hear when danger is approaching.

What really caught me off guard was the specificity of the murder scenes. While some scenes are left up to the audience’s complete imagination, other scenes show you step-by-step what happens. One thing that the film does is focus a lot on the tenants, rather than the victims that have fallen to the killer.

It seems director/screenwriter Jacob Tierney leaves it up to the audience to make their own conclusions on what is going to happen. At the end of this film you won’t know how to react, because just when you think you know someone you’re going to think again.