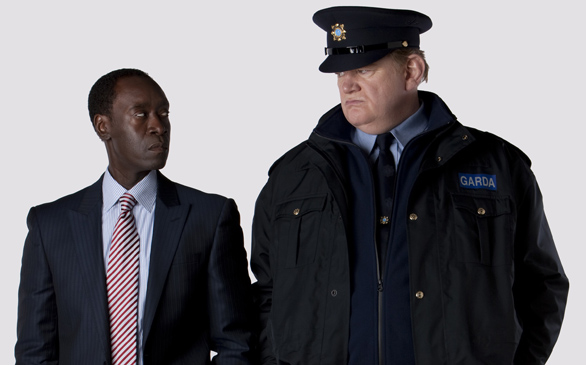 In The Guard, written and directed by John Michael McDonagh, Brendan Gleeson plays the title role of Gerry Boyle, a set-in-his-ways cop in a small town near County Galway, Ireland, who likes drinking lattes and seems to enjoy tampering with crime scenes. Boyle has clearly seen and done it all, and is not easily phased. He seems annoyed when he has to train a new officer and becomes even more displeased when a strait-laced FBI agent (the always wonderful Don Cheadle) floats into town, hot on the trail of a UK-based drug-trafficking ring.

While this film is clearly meant to be a showcase for Gleeson, who appeared in the a few Harry Potter films as well as had a starring role in the acerbic In Bruges (written and directed by McDonagh’s brother, Martin), the real gems of The Guard emerge when Gleeson and Cheadle share screen time. Gleeson’s Boyle is somewhat entertaining on his own – tampering with evidence; spending an afternoon with two prostitutes; swimming in the sea – but when paired with Cheadle’s smart but unassuming Wendell Everett, the comedic energy that emerges is truly brilliant. For instance, when the two first meet – in a debriefing where Everett is instructing Boyle and his fellow officers about what to do should they come into contact with one of the drug traffickers – Boyle makes an off-color comment about Everett’s race. When lightly scolded by Everett about his racial remark, Boyle doesn’t apologize; but instead assuredly clarifies that yes, he’s Irish, and therefore being racist is part of his culture.

The witty banter between the two continues on and off for the entire film, which, aside from the drug-trafficking storyline, also touches on a related murder investigation. And even though the film shines whenever Gleeson and Cheadle are paired up on screen, the flame burns out a bit when they’re not. The jokes aren’t as funny, and the story begins to drag. At least there’s Mark Strong, though, who plays one of the traffickers. He’s been popping up lately in all sorts of films – including Sherlock Holmes, Robin Hood and Kick-Ass – and isn’t any less entertaining during his small role in The Guard.

Overall, while The Guard lacks true witty brilliance and a fluid pace, it provides a good pairing between Gleeson and Cheadle. The addition of Strong is also a winner, as is the noticeable, artsy composition (saturated wall colors complemented by similarly hued ties, bathrobes and mugs in various scenes) by production designer John Paul Kelly (The Other Boleyn Girl).