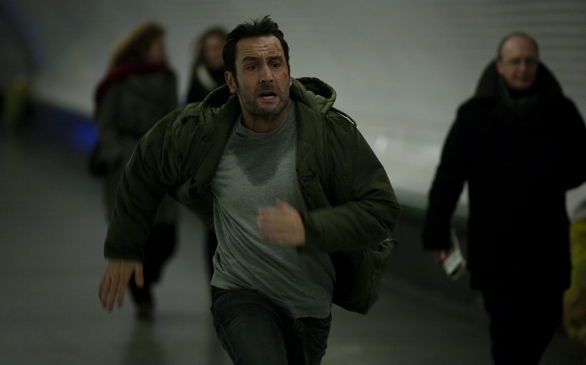 French film writer-director Fred Cavayé makes another action-packed film with his latest feature. Point Blank (À Bout Portant) starts out the gate with intensity and is captivating from the opening credits.

Samuel (Gilles Lellouche) is a nurse’s aid who is expecting a child with his wife, Nadia (Elena Anaya). Eager to take his nursing test in order to provide a better future for his impending family, he works hard. While at work one night, an attempt on a patient’s life was foiled by Samuel. Feeling like a hero, he unknowingly threw himself into harms way. Unexpectedly, he agonizingly sees his wife being kidnapped while he can do nothing to protect her. Now, he is forced to figure out how to break out this nameless patient, evade the police and gangsters and get his wife back safely.

You immediately build a bond with both Samuel and Nadia, therefore rooting for him to find her and bring order back in his life. Not everything is as it seems, and whom can he trust: the police, the criminals who have kidnapped his wife or simply, his gut instinct? The patient he breaks loose, played by Roschdy Zem, has one of the most effortless yet menacing stares. You just know that he means business.

The film is shot throughout the streets of Paris and couldn’t be more exciting. It is not all glitz and glam with shots of the Eiffel Tower, but shows us the seedier parts of the underworld society.

There are wrecks and chaotic mayhem that make you jump and scream, with no idea what is going to happen next. Talk about putting an ordinary man in extraordinary conditions. The film has twists and turns that take you on an unexpected ride.

I’m sure that this film won’t take long before it will be made into an American version with celebrity names attached. If you have the chance to see this film before that happens, it is a must. Guillaume Lemans co-wrote the film with Cavayé, and I look forward to any future projects with these two.